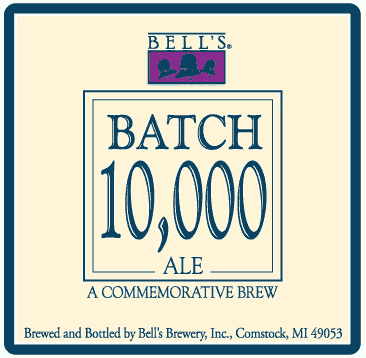 Information: Site – “The last of a series, Batch 10,000 Ale looks back to our roots, symbolizing the end of the home-brewing season with a creative take on “cleaning out the brewing supplies closet”.  After combing through the catalogs of many malt and hop suppliers, our brewers used over 100 different malts, grains, and other fermentables, and followed them up with a blend of  60 different hop varietals between the kettle additions and dry-hopping. The resulting beer presents a deep, chocolate brown hue and offers roasted and caramel notes from the malts mixed with an assertive hop character. Sharply bitter, the beer possesses a full mouthfeel without being heavy.”

One of the greatest things about craft-brews is that you are absolutely guaranteed ‘experimental’ batches, and our local Bell’s is no exception. Just last month I did a review on the amazing Batch 9000, and now Bell’s has once again released a batch -it’s final in the series it seems- for a limited time, and since Bell’s numbers its specialties by the thousands… here we have 10,000. I could not be more excited.

Dark brown hue at the pour with a slight head that hangs on as a lilting white cap. It has a subtle nose of wild berries and deep, rich hops. Undertones of crisp grapefruit rind and coriander flow forth with each swirl. There’s no doubt right now that we have a borderline IPA here, and so begins the tasting…

Very, very bitter… in a very fine way, indeed. This is like tasting the scent of a Douglas Fir; incredibly piney and full on roasted, nutty caramel notes. A bit sweet, but not cloyingly so. It has a mild astringent quality -obviously from the over abundant hops- but it’s not a taste that’s at all off-putting. There’ s a hint of maltiness going on here that one will surely discover after a few sips, but there’s no mistaking that this is meant to be a full on hoppy mouth experience with little remorse. And it is very good, indeed. This is one of those beers that you need to knock back a notch with something either salty (roast meat and gravy) or something very sweet (cheese cake comes to mind). It’s a reckless beer meant to remain memorable, there is no two ways about that. Awesome.

Rating: * * * * 1/2
So much going on in this beer, you almost have to wonder what ingredients were left over.