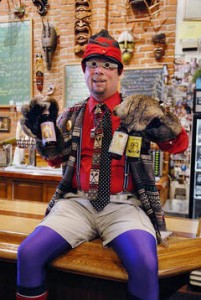 How can you not love Craft Beer Week? Any beer lover worth his salt is completely absorbed into this week like the proverbial white on rice. Craft Beer is where it’s at if you call yourself a true beer lover, and if you really call yourself such, then you’ve doubtlessly heard of Bell’s Brewery of Kalamazoo, Michigan. Owned and operated by Larry Bell (among other folks), Bell’s is not only a staple in Michigan, but also a true land mark. In fact, just one year ago Bell’s was getting too big for its britches in Comstock (that’s in Kalamazoo county, folks… trust me, I live and work here), and opened up new doors also in Comstock in an expanded facility described as follows:

Our most recent construction project, a 200-barrel brewhouse began in April, 2011 and officially opened May 14, 2012. Fourteen 400-barrel fermentation tanks, new grain handling facilities and an employee care area were also added expanding the brewery to just over 100,000 square feet.

Bell’s also has a yearly tradition here in Michigan, as well as just about everywhere else it’s found (18 states total) with the March release of Oberon, its Summer wheat ale:

It’s a huge deal, and despite what folks might try to tell you, it is a different batch every year, and yes, sometimes it’s hit or miss (thankfully, it’s a big hit this year).

Fortunately for us Kalamazoo-ans, we have just been given the prestigious 2nd-place position of Beer City USA, coming in just under another great town here in South West Michigan, Grand Rapids, where our third featured brewery (coming Wednesday) is located. So go on out and find you some Bell’s for this Craft Beer Week! I’ve reviewed many of their beers in the past, and you can find those links below:

Ok, so maybe my Bell’s Brewery addiction goes deeper than I thought. We’ve also included Bell’s brews on a few of our beer lists which you can find below :