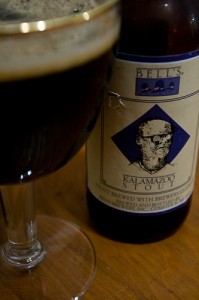 “A full-bodied stout with plenty of roast flavor. Kalamazoo Stout is available year round, leading our vast portfolio of stouts.”

There should be no doubt nor should it come as any surprise that I have a special affinity for dark, robust beers. I love Porters, Stouts, Dark Ales, you name it, there’s just something about their wicked blackness that appeals to me, as well as the potent flavors had by each and every one.
That being said, I generally loathe anise or black licorice flavoring (that is what you call a non sequitur), so, after reading the label on this bottle of Kalamazoo Stout where it prominently displays the fact that it’s ‘brewed with licorice‘, made me raise an eyebrow. Now, I have had this before, at Bell’s in fact (literally ten minutes from my house) and I really never noticed it too much. Until now. Once poured and opened up scent-wise, it is more than obviously there, yet not so much you want to cringe at it’s overpowering bouquet, because let’s face it: you know licorice when you smell it. The head is rich and creamy and leaves its lacing after every sip, which is quite cool if you like to know where you drank it from last.

Open up your mouth a bit and draw some air in as you swirl the first sip-ful around your tongue. Well-roasted Coffee beans. Full on and strong like a nice, awakening Espresso. The coffee flavor is so prominent that it heartily drowns out any lingering anise flavor that the initial smell brought on. I’m really okay with that. However, once the thick breakfast taste runs down your throat, a minor note of licorice stops by, fleetingly. In fact, if you burp while drinking it (and I did, excuse me), that licorice repeats its visit perhaps even a bit more boisterously than before.

When it comes to dark, dark beer, it’s hard to get beyond the look of a stout. This glass of Bell’s is as black as pitch, and it’s coffee/licorice main flavor is augmented by a nice hoppy, slightly malty finish. It’s such a complex beer that it almost likens itself to a well-aged, distinct wine. Awesome beer.

Rating: * * * **
Five Full Stars. Hey, admitted my love for this stuff right off the bat, so this rating is based purely on my joy.