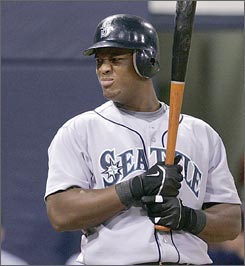 In what is sure to join the list of strangest athlete injuries (although this came on the field), Adrian Beltre of the Seattle Mariners has been placed on the DL with a torn testicle. Yep, the dude straight up busted his balls on a ground ball. Fanhouse has the story :

On Thursday, Mariners manager Don Wakamatsu, shaking his head in bewilderment, announced Beltre would be placed on the disabled list with a torn right testicle and was even more stunned when told that Beltre does not wear an athletic supporter, better known as a cup that protects the groin area.

I too like the freedom of free-balling it when playing sports, but this sure does make me think twice about that. Apparently Adrian has not seen this video (I recommend fast forwarding to the 4 minute mark, if you have little patience) :

In the ninth inning Wednesday night at Safeco Field, Beltre took the brunt of a hard grounder by the White Sox’ Alexei Ramirez to the groin area. Beltre recovered the baseball but threw wildly to first base for an error. He remained in the game, but labored for three more at-bats. Amazingly, he collected a single in the 14th inning and scored the winning run on Ken Griffey Jr.’s single.

I have to admit that is fairly bad ass to get the winning run with some dangling torn nuts. MAN CRUSH! I’ll spare you the rest of the details of the article, you can click through for yourself. I don’t think any man can read it without cringing. We’ll just leave you with this :