Ben & Jerry’s : Save Our Swirled 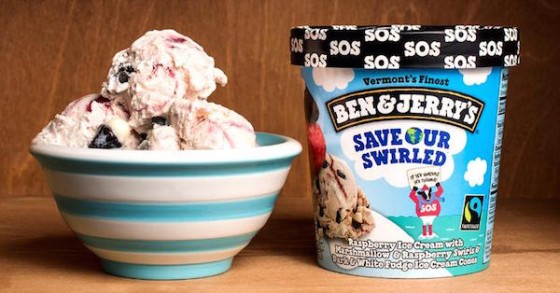 Everyone’s favorite producer of pint-sized ice cream, Ben & Jerry’s, has recently announced a new flavor to help battle global warming. They call it Save Our Swirled, and comes accompanied with the tag line, “If it’s melted, it’s ruined.” It was created to increase awareness about the global climate talks being held in Paris in December 2015. Together with activist group Avaaz, Ben & Jerry’s wants to encourage people to sign a petition demanding urgent action to be taken against global warming during the year-end talks.

While we definitely support the mission, we’re not sure if we can get behind the taste of the new flavor. It’s raspberry ice cream filled with swirls of marshmallow and raspberry, as well as dark and white fudge ice cream cones. That flavor isn’t for us, but we’ll definitely help spread the word that the world is getting hotter, because we don’t want all of our ice cream to melt!