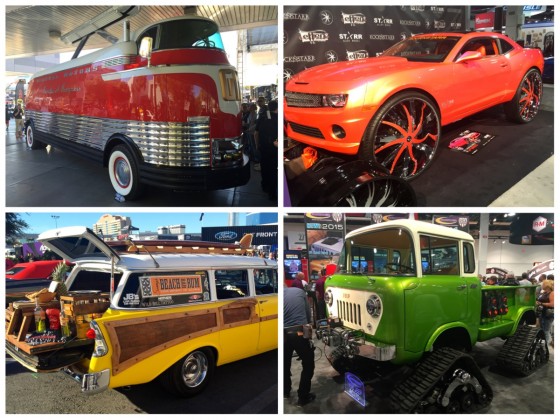 The SEMA (Specialty Equipment Market Association) Show is the premier automotive specialty products trade event in the world. It draws the industry’s brightest minds and hottest products to the Las Vegas Convention Center and concluded in spectacular fashion today. We traveled to Vegas with Kia this week for our first SEMA Show, and were dazzled by a variety of amazing vehicles as you can see from the photographs above. Nearly every booth at SEMA contained at least one vehicle that would be an absolute standout at any other auto show, but SEMA isn’t just any auto show. 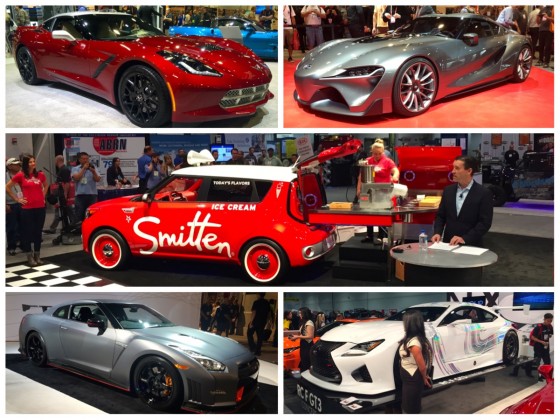 We spent all day on the show floor on Tuesday, and spent the majority of our time attending press conferences held by the major auto manufacturers, who were introducing special edition versions of their latest models. If you follow us on social media, you were likely overwhelmed with awesomeness, as we shared all of the coolest stuff live from the show floor. But we wanted to expand on some of our favorites, and have selected one vehicle from each of our favorite manufacturers to share with you in the list below. The amazing cars you see in the image above didn’t even make the cut, if that gives you any indication of the quality of the competition… 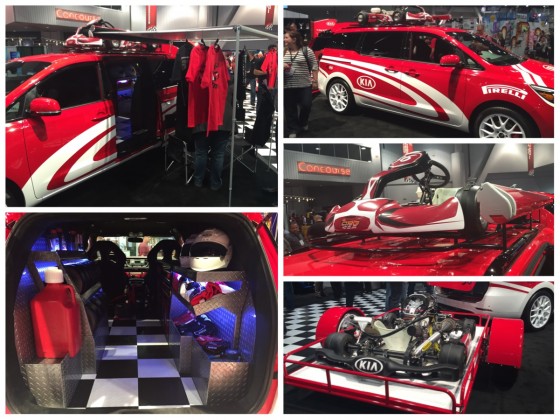 We’re a bit biased, since we traveled to the show with our friends from Kia, but we think you’ll agree they had one of the most fun booths at the show when we tell you they gave out FREE Beer and Ice Cream. We’ll detail the vehicles behind that awesomeness in a feature next week, but today we want to highlight our favorite of their five show vehicles, the Ultimate Karting Sedona. When we drove the new Sedona last month in California, Kia tried in vain to convince us that it was a cool multi-purpose vehicle, and not a minivan. They may have finally accomplished that goal by showing us the Ultimate Karting Sedona.

From the outside you can clearly see the paint job and accommodations for two karts : a CRG Bambindo kart for the kids on the roof, and a CRG Road Rebel shifter for the adults on the trailer. What sold us on this conversion though was the attention to detail on the inside. This isn’t some cosmetic makeover, Kia thought of absolutely everything you would need to support your own Karting team, and included it in this awesome Sedona :

Repairs and off-track tuning are all part of the fun of a day at the races, and the Sedona’s interior has been transformed into a mobile garage to carry the necessary tools, spares and supplies. The floor has been leveled and covered in black-and-white RaceDeck rubber flooring, and the vehicle has been kitted out with a toolbox, featuring a built-in Infinity subwoofer and amp, and a tire bead breaker. Hand-built, diamond-plate shelves fill the cargo area of the Sedona and provide storage for spare tires, a five-gallon gas tank and Sparco karting gear.  Sparco also supplied Chrono Road seats to finish off the racy look of the interior.

They even provided a retractable awning from the roof rack so you’ll have some shade when you sell your team t-shirts. 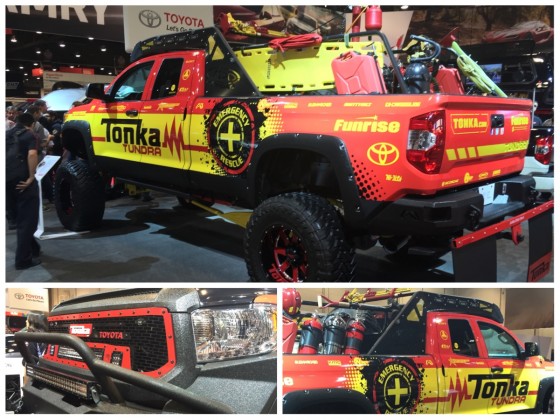 What boy didn’t have a Tonka truck growing up? We’re big fans of big trucks and off-roading here at Gunaxin, so this monster from Toyota immediately grabbed our attention. While the fleet of TRD-Pro vehicles in the Toyota booth were clearly a bit more realistic to own, this Tonka Tundra is the stuff of dreams and an awesome tribute to first responders :

The Tonka Tundra has been upgraded with all the gear it needs to back up its brash looks with scorching performance. TRD supplied a full complement of parts and accessories including a supercharger, dual exhaust and Big Brake Kit. A 10”+ custom Bulletproof Suspension lift and 20” custom Moto Metal wheels wrapped in Toyo’s 40” Open Country M/T tires allow the Tonka Tundra to go wherever the trouble is. 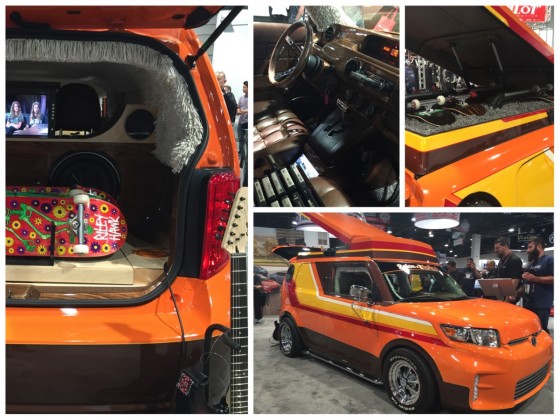 This retro shag wagon from Scion was easily one of the most fun things we saw at SEMA, and was the center of attention in their booth. Son of skate-legend Tony Hawk, Riley is a 21-year old professional with an affinity for the 70s, and we suspect this is the first time he’s ever seen an 8-track tape deck. This thing is so cool, we had to share the video walk-around with you :

Lexus did a bit of crowd sourcing when they built this special edition of their awesome new coupé, the RC F. At each step along the build process, Lexus asked for feedback from their followers on Instagram, and then made the public’s desires a reality. The Seafoam green color definitely stood out at SEMA, and we thought involving enthusiast via social media was brilliant. Check out this video for more details on the build, and to see fan selections : 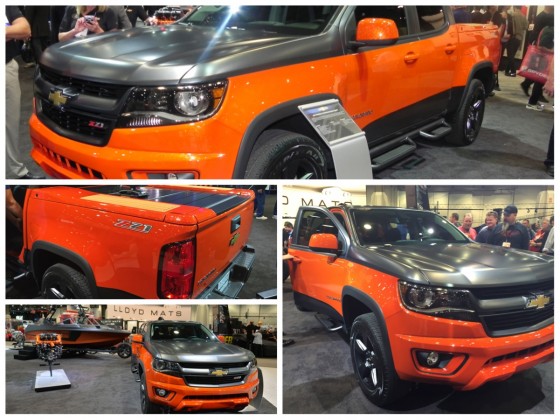 The Rickey Carmichael Performance Colorado Concept was more flashy and has gained more press, but when we saw the two up close, this Colorado Super Air Nautique was our favorite. It’s likely because we’re partial to anything orange, but the paint job on this truck was absolutely stunning. The photos just don’t do justice to the custom orange metallic flake combined with matte finish black. Throw in a matching boat and some “Technology and Stuff”, and you have a winning combination. It’s the first vehicle on this list that we could legitimately see ourselves buying if it were offered to consumers in this color scheme. 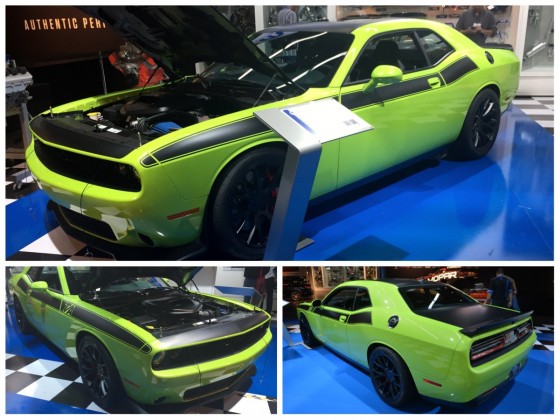 The Challenger is our favorite muscle car, and this one was the centerpiece of the Mopar display. It pays homage to a classic with a modern take on the T/A and also features a matte black hood and roof like the Colorado  :

“One thing about the Challenger is that it’s the ultimate muscle car and keeps to its roots,” said Mark Trostle, head of SRT®, Viper, Mopar® and Motorsports Design. “From a visual, emotional and aesthetic view, the Dodge Challenger T/A Concept draws back to the 1970 Dodge Challenger. Customers really like that we can play from our stellar history, and it’s a great way for us to take that T/A package and do a modern interpretation with this concept vehicle.”

You can find full details on the Dodge Challenge T/A in this press release, but we thought we’d share the inspiration for you below in an additional photo : 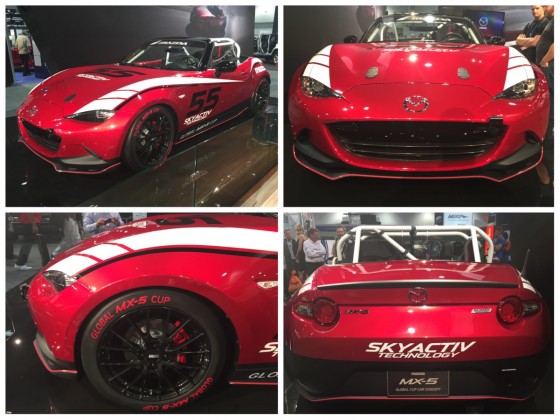 We knew Mazda was going to bring their newly unveiled MX-5 to SEMA, and the safest bet in Vegas was that it would be red. The MX-5 Cup is going worldwide in 2016 as the MX-5 Global Cup, and Mazda brought this concept vehicle with them to show what they’ll be racing. Our feelings were a bit mixed when the new MX-5 was revealed, but seeing it in person with this racing treatment sold us on the 4th generation of Miata. We can’t wait to drive one. 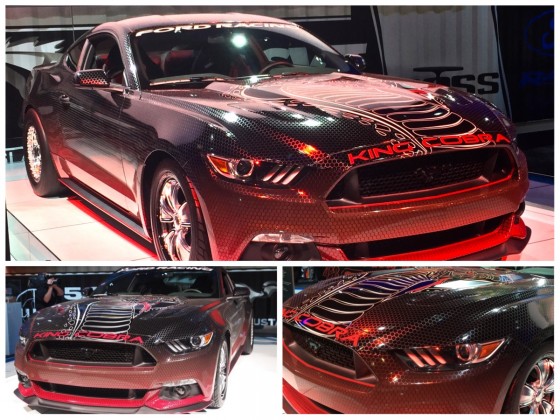 It’s probably blasphemy to put this Mustang so low on our list, but Ford will have to send us one to drive if they want it ranked any higher. They had more than a dozen on display at SEMA, but this 600-plus horsepower King Cobra was definitely the star of their massive booth. This particular model is configured for straight line speed with three option packs available to Ford buyers. With its fat drag slicks, they say it can put down a 10.97-second quarter mile time. The snake skin style wrap is certainly different, and we like different. 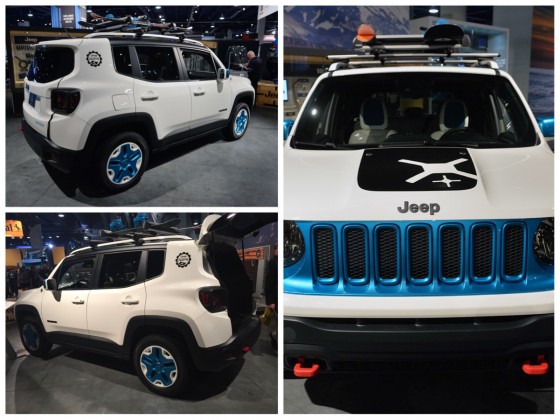 While white isn’t normally our favorite, this Jeep Renegade Frostbite caught our attention over the blue Riptide. The Renegade looks like a fun little vehicle, and this one came with rock rail guards, and a Mopar ski/snowboard roof rack. It remains to be seen how capable this newest edition to the Jeep lineup will be, but we think it’ll have no trouble finding an audience with its unique styling. 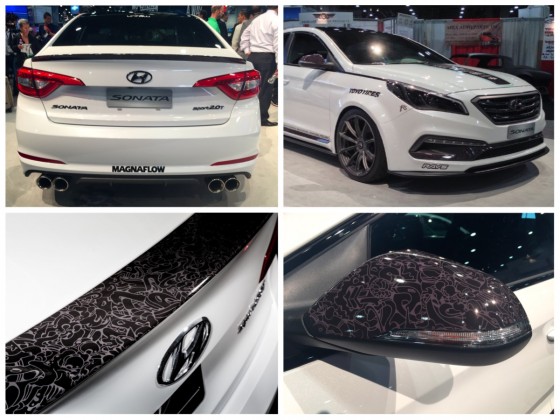 We finish off with another white vehicle, which had to be seen up close to be fully appreciated. This Sonata makeover is subtle and classy while lacking some of the flair of our other selections, but is intriguing in its own way :

With an emphasis on maintaining his signature build style, the JP Edition Sonata connects Los Angeles street art culture with automotive enthusiasts. By keeping the stock white paintwork as the visual base, JP wanted to represent a blank white canvas, upon which he would create a work of art. Working in collaboration with Flexfit | BSCMP and Mr. 44, a renowned Los Angeles-based street artist, the trio was able to create a Sonata that reflects a union between equally passionate street art and auto-enthusiast cultures.