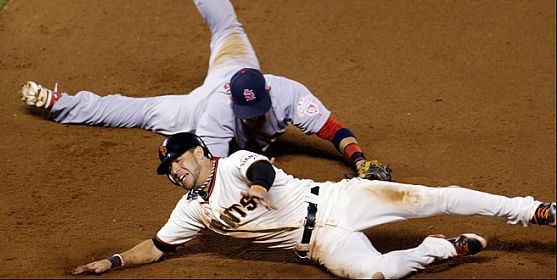 Tonight the San Francisco Giants host the Cardinals in game seven of the NLCS to determine the National League representative in the World Series. The Giants are attempting to come back from a 3-1 deficit to keep the upset-minded Cardinals from repeating a World Champions.

This is only the 15th game seven since the expansion of the League Championship Series to seven games in 1985, and has potential to be one of the best with two closely matched teams facing off to determine who will get to face the Tigers for the title. We’ve gone back through those 15 game sevens and identified the best of them for some perspective before tonight’s showdown starts.

In 1992 the two NL powerhouses faced off for the second straight year, with Atlanta the home team. The Braves had been the best team in the NL all season, at (98-64), two games better than Pittsburgh. Atlanta took the first two games at home, but the Pirates came back to take 2 of 3 in Pittsburgh, then won game six in Atlanta to force the deciding game seven.

Two aces took the mound in game seven, with the Pirates' Doug Drabek sporting a 2.77 era in the regular season and the Braves' John Smoltz sporting a 2.85. Pitching held serve throughout the game, with the Pirates able to scratch out runs in the first and sixth against Smoltz before he gave way to the bullpen. Meanwhile Drabek held the Braves scoreless over eight innings, giving the Pirates a 2-0 lead going in to the final frame. To the surprise of many, Drabek came out for the ninth. A double, error and walk loaded the bases, and Stan Belinda came in to try to shut down the rally. He did the opposite, allowing a sac fly and walk to leave the bases loaded and the Braves trailing by 1.

With two outs in the bottom of the ninth Francisco Cabrera, a lightly used pinch hitter, drove a two run single to left, driving in Sid Bream with the winning run, and ensuring that both of them would never be welcome in Pittsburgh again. The 3-2 loss was the last time the Pirates made the playoffs.

This one is a little different from the rest of the games on our list, as the final result was really never in question. Reminiscent of this season's NLCS, the Cardinals led the series 3-1 and needed only to win game five at home in order to advance. John Smoltz, Greg Maddox and the bullpen had held the Cardinals to one run combined in two Braves wins, forcing the series to a deciding game seven. In that game the East division champion Braves brought their third big gun, Tom Glavine, to the mound against little-known Cardinals pitcher Donovan Osborne.

The result was ugly, with the Braves scoring early and often to knock Osborne out of the game after only 2/3 of an inning. Paced by a stellar three hitter by Glavine, the Braves pitchers kept St. Louis off the scoreboard while Atlanta's hitters went wild, scoring 15 runs on the way to a 15-0 victory, the largest margin of victory in game seven history. 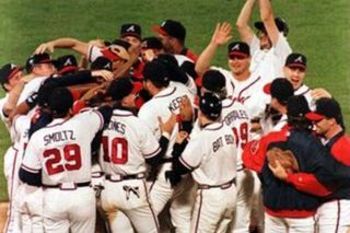 Nothing sums up this game quite like Aaron "Bleepin'" Boone. Grady Little, the Boston manager, had become one of cities biggest goats by leaving Pedro Martinez in to surrender a 5-2 lead in the eighth inning, and it got worse for Red Sox fans from there. Separated from ending their long World Series drought by only five innings, Pedro surrendered four straight hits, three of which turned into runs for the Yankees. Three innings later it was another pinch hitter, 3B Aaron Boone, who put the final nail in the Red Sox coffin. Facing knuckleballer Tim Wakefield to lead off the bottom of the 11th inning Boone parked one in the bleachers, leading the Yankees to the World Series and extending the Red Sox futility one more year.

2003 was a year of history in the LCS's, as the Cubs tried to shake their own curse against the mercenary Marlins. This game was decided before the first pitch was ever throw. Needing those same five outs in game six, the Cubs suffered one of the biggest letdowns in baseball history. A Chicago fan named Steve Bartman, seeing a Luis Castillo foul ball heading his way, reached out and grabbed it from the grasp of Cubs' outfielder Moises Alou, costing the Cubs an out and turning Bartman into a pariah.

The blame never rested with Bartman alone, however, as Alou's histrionics have been blamed for causing the meltdown that led to the Marlins scoring eight runs to force a game seven.

In game seven the Cubs again held the upper hand briefly. With ace Kerry Wood on the mound, Chicago went out to an early 5-3 lead, including a Wood home run. That would be the only time that the Cubs had control though, as the Marlins scored six unanswered runs in the 5th-7th to take a lead they would never surrender, winning 9-6 to move on.

We already talked about the Cardinals collapse in 1996 (and 2012) but it hasn't been all bad news in game sevens for the boys from St. Louis.

The 2006 Mets were a powerhouse, winning 97 games on route to the NL East title. Meanwhile the Cardinals were barely qualified to be in the playoffs, finishing a scant five games over .500 at 83-78 in a week NL Central. The two starters, Jeff Suppon and Randy Flores, did their part, only allowing one run each to leave the score tied at the top of the ninth inning.

That was when the magic happened for the Cards. After a Jim Edmonds strikeout Scott Rolen scorched a base hit to left, putting the go ahead run at 1st. Yadier Molina didn't need to worry about the runner though, as the light hitting catcher (.595 OPS in 2006) cleared the bases with a home run to left. Adam Wainwright, in his final year as a reliever, came in to record the save in the ninth to give the Cardinal an upset series win. 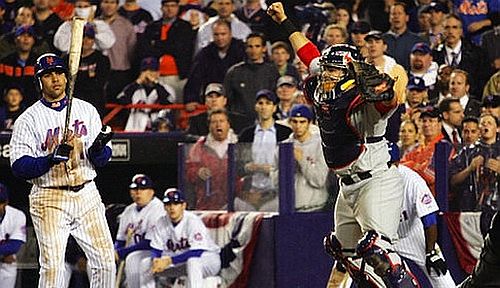