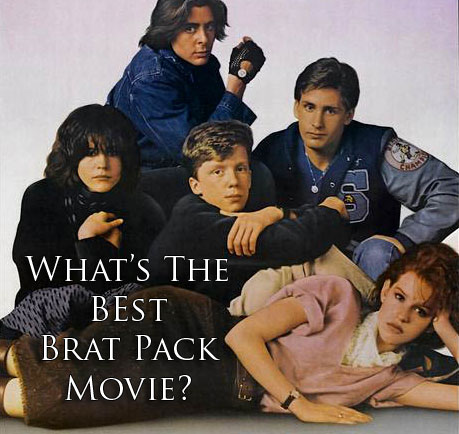 Emilio Estevez. Anthony Michael Hall. Rob Lowe. Demi Moore. Judd Nelson. Molly Ringwald. Ally Sheedy. Andrew McCarthy. All fine actors when they were younger, all has-beens today (you heard me right). The list of actors could be longer but these are the core players in a string of coming-of-age movies that we fell in love with in the ’80s. Also, for this list we’ll focus on the obvious Brat Pack movies, though there are a few more that could be included for various reasons. First we’ll give the outline, then you can VOTE AT THE BOTTOM.

Anyone who was anyone was in this Francis Ford Coppola film, including Brat Packers Estevez and Lowe, but also close associates Matt Dillon, Patrick Swayze, Tom Cruise, C. Thomas Howell and Ralph Macchio. Unfortunately, the film was just ehhh… and is better known for the cast than the story.

The tagline is: The good news is, Jonathan’s having his first affair. The bad news is, she’s his roommate’s mother! With McCarthy, Lowe, and also John Cusack.

To me this is the classic Molly Ringwald and Anthony Michael Hall film, about a girl whose family forgets about her 16th birthday. John Cusack also makes an appearance.

The tagline is… He fell in love with a girl and conned his way into Oxford University just to meet her. Now he’s learning how to be a winner! With Lowe and Sheedy.

Anthony Michael Hall in yet another John Hughes film.

This is one of the most famous Brat Pack movies, along with St. Elmo’s Fire. It stars Estevez, Hall, Nelson, Ringwald and Sheedy. A group of high schoolers has detention on Saturday, and they ‘find each other.’

Along with The Breakfast Club, this is the other major Brat Pack film, with a cast of Estevez, Lowe, McCarthy, Moore, Nelson and Sheedy. Along with Mare Winningham, a group of longtime friends finds that life changes after college and it’s not as easy to stick together.

With McCarthy and Ringwald, and also Jon Cryer and James Spader, this is another John Hughes teenage love and social cliques movie.

With Nelson and Sheedy, this is about a young man who returns to a corrupt small town in Florida to avenge the death of his father. This is generally said to be the worst Brat Pack film.

Lowe and Moore are a man and woman who meet and try to have a romantic affair, despite their personal problems and the interference of their disapproving friends.

Written and directed by Estevez, he and Moore got bad reviews, as did the film.

McCarthy and Ringwald. A college student breaks up with his wealthy fiancée after he falls in love with a Kentucky girl. And… she says she’s 20, but he finds out she’s 16 and married to an abusive husband.