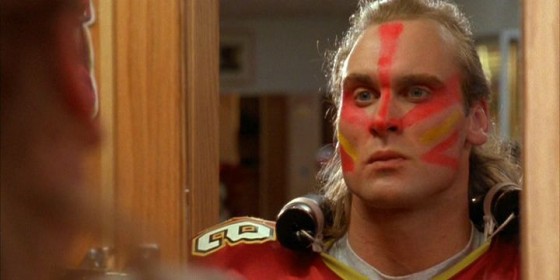 The 2020 college football season concludes tonight, with Alabama facing Ohio State for the BCS title. For die-hard college football fans this coming weekend will be one of withdrawal, as it marks the first time since August that there won’t be any college games, at any level, being played.

While some fans will migrate to the NFL playoffs, and others will rewatch games from this season, we’ve decided to help out those who are looking for a third option. We’ve compiled a list of the best college football movies, ranging from tense dramas to slapstick comedies, and ranked them for you below.

We were a bit surprised by how many documentaries wound up on this list, considering the dearth of great ones before the last few years. That said, ESPN’s “30 for 30” production has raised the level of sports documentary and given us a number of instant classics. “The U” chronicles the story of the University of Miami football program under Jimmy Johnson in the 80’s and 90’s and how it changed the face of college football.

We never said it had to be a good movie to be a great football movie, which affords “Necessary Roughness” a spot on our list. Starring Jason Bateman, Sinbad and the guy from Quantum Leap (Scott Bakula), “Necessary Roughness” is a formulaic comedy that follows the worst team in college football as they attempt to survive their first season. Bonus points for the appearance of Kathy Ireland at her absolute finest as kicker Lucy Draper.

A recent addition to the pantheon of great sports documentary, “A Game of Honor” is a Showtime documentary about the tradition of Army and Navy football. While the programs have fallen from their national contender days, the rivalry is still among the best in sports, and the film looks at the young men who commit to both football and the military over the course of a season.

We’re cheating a bit in including “Johnny Be Good” here, since all the football played is at the high school level. Still, the movie revolves around the recruitment of Johnny Walker, the nation’s top high school QB and the target of most college football coaches. Starring Anthony Michael Hall (it was the 80’s), Robert Downey, Jr. and a teenage Uma Thurman, “Johnny Be Good” has some of the best one liners of any football movie.

Our top documentary, “Pony Excess” is an in-depth look at the dirty business that led to Southern Methodist University receiving the first and only death penalty handed down by the NCAA. Directed by SMU graduate Thad Matula, the film was released as part of ESPN’s “30 for 30” series.

The top comedy on the list, “The Waterboy” is pure slapstick fun. Adam Sandler stars as Bobby Boucher, a “special” waterboy who turns into the best defensive player in college football. It’s not a great story, but it’s fun from start to finish and one of the most enjoyable sports movies ever made.

While many regard “Rudy” as the best college football movie ever made, you can’t include our judges on that list. The film tells the story of Daniel ‘Rudy’ Ruettiger, a mediocre walk-on at Notre Dame. While the final scene is stirring, it’s lost much of its appeal since it was revealed by Joe Montana that most of the drama was fake and that his teammates carried him off as a joke.

“The Express” is one of those sports movies where you remain riveted even though you know how it ends. The drama tells the (mostly) true story of Ernie Davis (Rob Brown), the first black Heisman Trophy winner, who starred at Syracuse before moving on to the NFL before his death at 24. The film also stars  sports movie staple Dennis Quaid as Ben Schwartzwalder, the Syracuse coach who brought Davis to the school amid the backdrop of 1950’s racial tension.

The only film on our list to include a future president, “Knute Rockne: All American” is the sweeping story of college football’s most innovative coach. Starring Pat O’Brien in the title role, and featuring Ronald Reagan as the doomed George Gipp, the 1940 classic stands the test of time as a great sports movie, and includes one of the most quoted inspirational speeches ever.

There really could be no other choice for the top spot on our list other than the 1993 blockbuster “The Program”. Starring James Caan as the head coach of a powerhouse football school, the film took some direct shots at the dirty underbelly of college sports. Controversial at the time it came out, looking back most of the scandalous parts seem commonplace in college football. This film was so influential that it actually was banned in some places, before being edited to remove a scene that was blamed for some deaths. “The Program” also featured a young Halle Berry and Kristy Swanson, so it’s got that going for it as well.

Drama: “We Are Marshall”