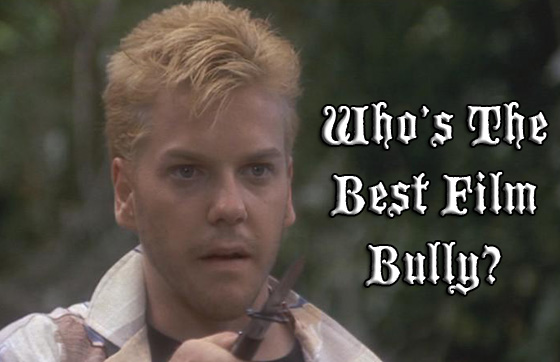 There is a long history of the bully in film, but there’s nothing like the young bully, torturing the hero and attempting to destroy his or her childhood or young adulthood. But who’s the best? As in, if we put all of these guys and gals together in a Battle Royal, who’d come out on top? That would make them the ultimate bully, right? Here are 15 of our favorites (we left out our non-favorites on purpose just to piss off the Gunaxin readers, in typical bully fashion). VOTE AT THE BOTTOM.

Ace Merrill
Stand by Me

Ace is the ultimate bully. He punks around his own crew and comes a gunshot short of slicing Chris Chambers’ neck.

How he gets it in the end: Gordie pulls a gun on him and he doesn’t get to claim credit for the dead body. We’re assuming he gets revenge later but the story ends.

Biff Tannen
Back to the Future

Biff punks around McFly so easily it’s a wonder he even bothers. He also steals McFly’s wife in Part II. His catch phrase: “Hello, McFly.” His weapon of choice: the noogie. Biff is the stereotypical bully.

How he gets it in the end: Marty keeps making him crash into manure, and in the alternate future he’s a loser who answers to McFly.

Bobby has no problem raping his best friend’s girlfriend while the best friend watches and acts like it’s no big deal afterward.

How he gets it in the end: He gets lured into a remote Florida swamp under false pretenses, where his friends proceed to beat him to death.

Roughs up nerd Jerry Mitchell for touching him on the shoulder, then challenges him to a fight after school.

How he gets it in the end: Jerry knocks him out with brass knuckles.

How he gets it in the end: Kelly LeBrock, (the dream girl they created on their computer) humbles Chet by turning him into a squat, green monster.

Harasses Ralphie Parker and his pals by twisting their arms until they say Uncle.

How he gets it in the end: Ralphie loses his shit after Farkus hits him in the face with a snowball, then beats Farkus until he bleeds.

This is the ultimate bully who beats the hell out of his opponents, using only violence.

How he gets it in the end: Daniel beats him in the tournament with a silly crane kick.

He and his gang of bullies terrorize kids and extort their lunch money.

How he gets it in the end: Clifford Peache, under the direction of his bodyguard Ricky, breaks Moody’s nose in the climactic final fight.

He’s a jerk, he has the girl, and he beats Scott (Michael J. Fox) at basketball.

How he gets it in the end: Gets beaten at basketball by the non-werewolf Michael J. Fox and loses the girl. Shocker!

Bullies the cadets and has them kill a horse.

How he gets it in the end: Gets shot in Vietnam, by his own troops.

The O’Doyles were a family of bullies that argue with and annoy Billy Madison as he goes through school.

How they get it in the end: The family is driving along in their car, repeating “O’Doyle rules!” over and over, when the car hits a banana peel tossed into the road by the bus driver and careens off a cliff.

Also check out O’Doyle on the list of best fist pumps in film.

Leader of the “Plastics” clique of bitchy, stuck-up girls. Keeps a “Burn Book” filled with nasty secrets and gossip.

How she gets it in the end: She loses her clique and boyfriend, gains weight, and finally gets hit by a bus. Ouch!

Stan Gable
Revenge of the Nerds

How he gets it in the end: After burning down the nerds’ house, he loses his girlfriend to a nerd and gets interrupted at the pep rally.

Teddy is a spoiled rich kid who ignores his hot girlfriend to swim laps. He physically and verbally abuses people, including the guy who works on his Ferrari.

How he gets it in the end: His car gets chopped up by a chainsaw and used as part of a souped up boat that ends up defeating his own in the Nantucket Regatta. George takes his hot girlfriend from him. They also put a truckload of lobsters in his swimming pool which interrupts his laps.

George Tooney is the big, fat, impulsive enigma that had a history of attacking all of the other main characters in Mean Creek playground style.

How he gets it in the end: He gets lured by the main characters into getting pranked, but accidentally ends up dead via drowning.