Sports > Hockey > The Best Hockey Fight Of The Year

The Best Hockey Fight Of The Year 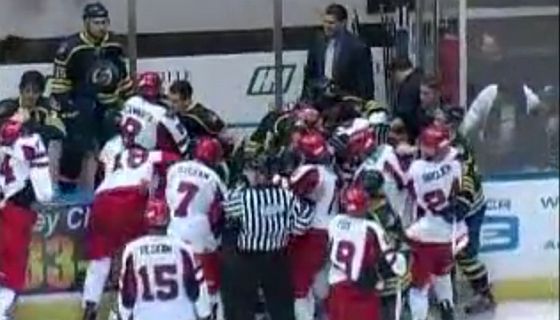 You can be excused if you’ve never heard of the Southern Professional Hockey League, mainly because we haven’t either. The Southeastern based league features teams from Alabama, Mississippi, and other states not known as hockey hotbeds. Even if the hockey isn’t pro level in the SPHL the fighting definitely is up to NHL standards. In a game this weekend between the Mississippi Surge and Huntsville Havoc a brawl broke out that may be one of the best hockey fights we’ve ever seen.

The dust-up touches off when Havoc Left Wing Corey Fulton was pushed into the Surge bench, and immediately pummeled by half a dozen opposing players. Eventually both benches, the goalies and the trainers get involved in a full ice riot.

The real star of this fight, however, is the announcer, who uttered the quotable “If you are going to fight, that’s one thing, but then you get out a stick that’s a complete wussy move, a complete jerk.”