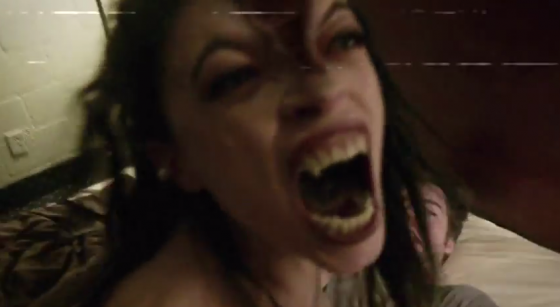 Sadly, horror films have become vapid, cookie-cutter versions of themselves over the past few years. It seems that whenever a new horror movie comes out, you can be more than guaranteed that it’ll fall into one of a few pretty specific categories.

First, you’ve got the overdone to death ‘Found Footage’ films in the vein of The Blair Witch Project and, of course, the insufferable Paranormal Activity. Then there’s the ever-present Demonic Possession films much like, well, just about any movie with Exorcism in the title, or other such flicks that are similar including Insidious. And of course we can’t forget the non-stop influx of zombie and vampire related movies like Stake Land and Resident Evil. And finally there are the leftover crumbs that make up remakes, continuations, and sequels such as another Texas Chainsaw Massacre, an unnecessary Silent Hill, and the list goes on… and on.

So, basically what I’m saying is there’s not too much new happening, and even the formulaic films that have done well (and have found a place on this list) still manage to fit snugly into these common types. Oh well, what are you gonna do? If you’re as rabid a horror fan as I am, you still scope them all out and just hope beyond hope that someone can crack the genre mold just a little. And I believe these five films have done just that.

Oh, and this list is predicated on the fact that I have yet to see Sinister. But I’ll get to it eventually. And who knows… the list might change.

Eerie. There's your word for this movie, kids: eerie. And really the only things I can think to nitpick about it is that the characters are kinda unlikable... and I do mean all of them. Fortunately, and eventually, you do get to feel bad for three of them. Which is a good thing, because it's those three people who you really want to feel for as the plot builds to its inevitable crescendo. I say inevitable because we've all seen this type of movie before: mutants living out a bizarre existence in some kind of otherwise lifeless town (in this case, post fallout Chernobyl) and attacking anyone who stupidly wanders into their territory. Well, that happens and cue the mutants. Yeah, it has predictable moments, but the scares are pretty frequent and they get good jumps in now and again. But for my buck it was the ending that was a nice reversal, and I can honestly say I didn't see it coming. Decent flick and certainly worth a watch.

The Woman In Black

Remember the good old days back in the '60s and '70s when Hammer Horror took the reigns of the classic Universal Movie Monsters? New Dracula, new Frankenstein and all of them? Yeah, well Hammer's back, and their first big foray in their return to filmdom is The Woman in Black.

Daniel Radcliffe in one of his post-Harry Potter performances proves that he is indeed not a one-trick pony. Though I'd be a liar if I didn't half expect him to whip out a wand at some point and shout a spell. Anyway, he plays Arthur Kipps (that name alone sounds like it was created by Rowling), a lawyer who is hired to sell an old manor called Eel Marsh House -- an incredibly bleak and foreboding mansion that just exudes eeriness. As he visits, he is quickly inundated with sounds and sights of the house's past -- death, murder, and betrayal. Kipps sees visions of the manor's former guests mucking about in ghostly fashion and begins to unravel the mystery of their untimely demises. It's a wonderfully knit and taught spook tale that does a fine job of pushing the PG-13 envelope with its fear tactics. A great movie and something perfect for the days before Halloween.

What a surprise this little gem was. As a slobbering, groveling fan of horror who chews through movies like a cinematic wood chipper, it was really nice to take pause and slow down a bit for a story with such unusually purposeful build up as The Innkeepers. At first, I can honestly admit I wasn't sucked into the story mostly because the characters seemed to be so nonchalant and work-a-day that they didn't exhibit any large auras of interest. But that quickly changes once we discover that the hotel (The Yankee Pedlar Inn) is supposedly haunted and the lead, Luke (Pat Healey) has been tracking the activity on his website.

As it turns out both he and Claire (Sara Paxton) are avid spook hunters, so each takes a turn watching for potential happenings on the Inn's last week of operation. Not too much aside from noises and what was that? moments occur until a few odd guests stop to stay for the final days. That's when the creepy level is amped up to eleven and what was once a slight, bare-bones ghost story turns quickly into a shriek fest for the ages. This one is well worth a watch and will definitely leave you scared, unnerved, and in a bit of wonder.

The Cabin in the Woods

When The Cabin in the Woods came out I wasn't able to see it in the theater for whatever reason and I was immediately dodging as many internet reviews as I could so as to avoid whatever spoilers and surprises lay ahead. It was tough, but I managed to keep myself free from the news until I was able to see it for myself a little while later. Needless to say, I was pleasantly thrilled and just as taken aback at its subtle goofiness. But don't let that last part fool you if you haven't seen it yet; it's still one hell of a ride and absolutely worth a viewing. Oh, and it's another in the Joss Whedon masterpiece collection (ha ha ha).

**Spoilers just in case you haven't seen it**

Basically what we have in the opening is your run-of-the-mill vacationing college kids heading off to camp. Cookie cutter like you read about, up to and including the requisite Jock, Stoner, Beauty, Innocent, and African-American. It reads like a hundred other films of its ilk. Ah, but only for a little while. That's right about the time you begin to realize there's a company controlling these kids' every move -- drugging them secretly, nudging them in various directions into various scenarios with various methods; all to fit into one of hundreds of different Horror Movie Molds. It's pretty damn genius. But things don't always go as planned, and the company ends up dealing with far more than it ever intended. And I'll leave it at that. See the movie. I promise you there's nothing else like it.

This might be the most talked about and overly reviewed movie in 2012 thus far. Why? Well, aside from the fact that it is, once again, a Found Footage style movie, it's done in a completely new and relatively different way -- seen through the recordings of old VHS tapes located in the basement of house being ransacked for one tape in particular. Each segment is a terrifying look at just about every style of horror you can imagine from vampire-like succubi to video-hidden woodland serial killers to crazy women to demonic possessions. It's all there and it's wonderful.

Each tape is done so creatively and so spectacularly by different directors that each story is just a thrilling ride in and of itself. Sure, there are naysayers who nitpick that some of the tales are maybe a bit weaker in some respects than others, but those people just like to bitch. This is far and away the freakiest and most exciting horror movie I have seen in a good long while, so much so that I went back and watched it again right away. Take a look, you will not be disappointed.