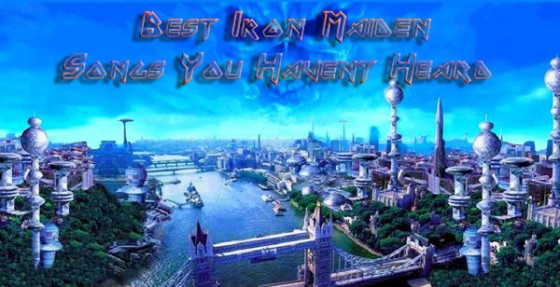 Iron Maiden is at it again with their 15th studio album The Final Frontier. I was one of the lucky ones who caught them in concert during the Final Frontier World Tour, where they delighted the crowd to many of their songs from the past decade. Like any band, Iron Maiden has its share of casual fans, who only know the hits, the 80s fans who only know the first seven albums, and die-hard fans like me who know every lyric to every song they ever released. This article is for those who only rock out to Run to the Hills and Number of the Beast, and haven’t heard the masterpieces they’ve put out since. So here is a list of the best songs that the casual fan likely hasn’t heard. It will NOT include greatest hits (The Trooper, 2 Minutes to Midnight, Hallowed Be Thy Name, Aces High, Fear of the Dark, etc.), so don’t complain if I left any off.

(NOTE: Several of the videos below are fan-made hybrids of the song and images.)

Face in the Sand – Dance of Death

The intro to this song is beautiful and soothing, something I could easily let my grandmother hear. Obviously, the drums and tempo kick up and Dickinson roars apocalyptic lyrics into the mic.
Best lyrics:
So I watch and I wait, and I pray for an answer
An end to the strife and the world’s misery,
but the end never came
And we’re digging the graves,
and we’re loading the guns for the kill
Can the end be at hand? Is the face in the sand?
Future memory of our tragedy

Virus – Best of the Beast

This song is on one of their Greatest Hits albums, but it isn’t actually a greatest hit. It was a new song that they put on the album so fans would have a reason to buy it, a marketing trick that almost every record label and artist does. It’s one of the best that Blaze Bayley sings. I’m not sure what it’s about, but I keep wanting to believe it’s about the great plague of London in 1665. I’m likely way off but considering how much thought, research, and preparation that Steve Harris typically puts into lyrics, I’d like to believe it’s about some kind of historical event. One note: This song starts off very slow (in fact the first two-plus minutes suck), but then it breaks into a great melody, only to change up into something completely different and even better (even with choral sounds as decoration). It’s metal heaven.
Best lyrics:
The rats in the cellar you know who you are….
Or do you?

This might actually be more popular than I think, but it doesn’t get the play it deserves. The theme is very simple – it’s about having de ja vu, which is actually quite different than some of their songs which require one to crack the books to understand (like The Rime of the Ancient Mariner, which I think you need a PHD in literature to understand). But the riffs and melodies make it superb.
Best lyrics:
Cause you know that this has happened before…
And you know that this moment in time is for real…
And you know when you feel deja-vu…

The entire album of A Matter of Life and Death is a masterpiece. Each song sounds great and has meaning (as opposed to ‘dumb’ songs that just sound good). Here, For the Greater Good of God rises above them all, a 9 minute, 25 second religion-themed epic.
Best lyrics:
More pain and misery in the history of mankind
Sometimes it seems more like the blind leading the blind
It brings upon us more of famine death and war
You know religion has a lot to answer for

A song I can tell my grandmother about, considering it is a virtual history lesson about a bloody battle during World War I. Forget high school history, I should’ve just been listening to Maiden and taking notes. Incidentally, this is another song that starts out slow, and kinda weird, only to change up and rock out. Maiden often uses this formula.
Best lyrics:
Crucified as if on a cross, allied troops they mourn their loss
German war propaganda machine, such before has never been seen
Swear I heard the angels cry, pray to god no more will die
So that people know the truth, tell the tale of Paschendal

Every time I hear this song, when the following lyrics play on my Ipod while I’m riding the subway, I break out into song:
There are times when I feel I’m afraid for the world
There are times I’m ashamed of us all
When you’re floating on all the emotion you feel
And reflecting the good and the bad
Will we ever know what the answer to life really is?
Can you really tell me what life is?
Maybe all the things that you know that are precious to you
Could be swept away by fate’s own hand

The Clansman – Rock in Rio (NOT Virtual XI)

This song, too, has a following, and it’s now regularly played live, but may have been missed by many because it sounds awful in its original release on Virtual XI with Blaze Bayley. But when I heard Bruce Dickinson sing it live, I found myself watching Braveheart and then going out to beat the hell out of every Englishman I came across, screaming “FREEDOM!”
Best lyrics:
It’s a time wrough with fear
It’s a land wrough with change
Ancestors could hear
What is happening now
They would turn in their graves
They would all be ashamed
That the land of the free
Has been written in chains

The Thin Line Between Love and Hate – Brave New World

First of all, Brave New World is also a masterpiece of an album, and Iron Maiden played several of those songs on the live disc Rock in Rio. Ghost of the Navigator, Blood Brothers (which I noted above), and Dream of Mirrors are metal symphonies. But don’t sleep on the last song on the album, The Thin Line Between Love and Hate.
Best lyrics:
I will hope
My soul will fly
So I will live forever
Heart will die
My soul will fly
And I will live forever

The Loneliness of the Long Distance Runner – Somewhere in Time

A song based on a short story by the same name, and later a film, here’s another Maiden song that both literature enthusiasts and metalheads can enjoy together.
Best lyrics (SPOILER ALERT):
The line is getting nearer but do
You want the glory that goes,
You reach the final stretch,
Ideals are just a trace,
You feel like throwing the race,
It’s all so futile
Enjoy this video of Forrest Gump running to this song:

Different World – A Matter of Life and Death

Again, every song on this album is great, but I’ll limit the songs I pick for this list to two, and Different World is perhaps the most mainstream-sounding tune on this album.
Best lyrics:
Tell me what you can hear
and then tell me what you see
everybody has a different way to view the world
I would like you to know, when you see the simple things
To appreciate this life, it’s not too late to learn

Lord of the Flies – The X Factor

I probably like this song only because I love the William Golding book by the same name, one of the few cool books we actually got to read in high school. Blaze Bayley originally sang this literature-themed tune, and Dickinson does a good job, too, on the live album Death on the Road. (There’s another song on this album, Sign of the Cross, that sounds better when Dickinson does it live on Death on the Road as opposed to Bayley on The X Factor.)
Best lyrics:
Saints and sinners, something within us
We are lord of the flies

Another history lesson, this one about an event far more obscure than World War I. I’ll admit this song isn’t for everyone, and musically isn’t their best, but it’s smart – very smart. Look it up. If a band like Iron Maiden finds this chapter in history interesting, then the fans should as well.
Best lyrics:
As we kill them all so god will know his own
The innocents died for the pope on his throne
Catholic greed and its paranoid zeal
Curse of the grail and the blood of the cross
Templar believers with blood on their hands
Joined in the choruse to kill on demand
Burned at the stake for their soul’s liberty
To stand with the cathars to die and be free