The Best Moments From the Leprechaun Horror Film Series 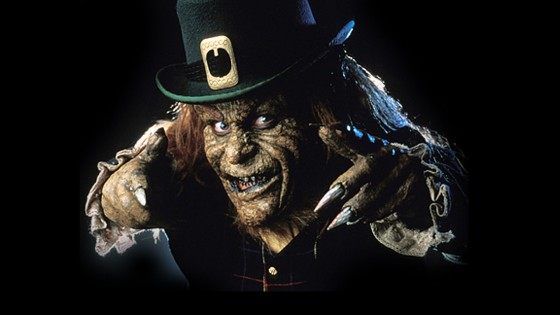 Today is St. Patrick’s Day and the Leprechaun is a traditional symbol of said holiday. So we thought it would be a good time to look at the most famous St. Patrick’s Day movies, the Leprechaun series. English actor Warwick Davis plays the title role in the first six films. In the Leprechaun: Origins reboot, Dylan “Hornswoggle” Postl, of WWE fame, portrays Lubdan. 2018’s Leprechaun Returns takes place 25 years after the original film. Linden Porco plays the title role, while Mark Holton reprises his role of Ozzie Jones from the first film.

It’s obvious that the series has gone on far too long at this point, but there were still some pretty classic scenes from the original six flicks. Check out these potentially NSFW clips… and have a happy St. Paddy’s Day!

Quote – Leprechaun: “I’ll not rest till I have me gold. Curse this well that me soul shall dwell, till I find me magic that breaks me spell.”

Quote – Leprechaun: “Death to he who sets a Leprechaun free. Steal his gold, it will corrupt your soul, you see. For many a moon the legend has grown, death toll increases, solution unknown. Beware the evil wanderer in search of his loot, lest you suffer the wrath of his golden flute. Flee while you can, the future’s not good — for no one is safe from a Lep in the Hood!”

Quote – Leprechaun: “Don’t you presume to tell me right from wrong. You compromised all you believed in once you got the gold, just like all those before you. Your kind is weak, and will always give in to your selfish yearnings.”