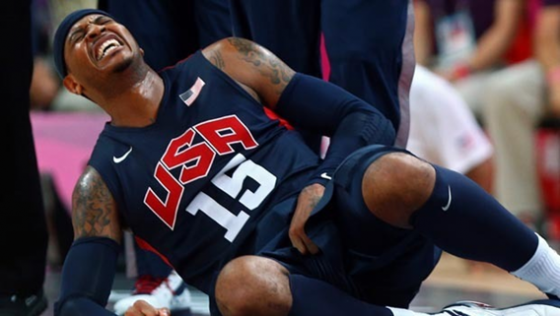 Real basketball fans know all the kinds of shots that bust out on the hard wood, and which players own each one. From Larry Bird’s and Michael Jordan’s mid-range jumpers to Kareem Abdul-Jabbar’s skyhook and Kobe Bryant’s clutch fadeaway to Ray Allen’s and Reggie Miller’s three-point daggers, a true student of the game can diagram in detail how each of these plays develop and recount specific instances where each won an important game or two.

But what about nut shots? Who has the best one of those? And how do those arise on the floor? Ah, got you there.

Have no fear. You’ll no longer telegraph mental impotency the next time you debate your sports buds or bore your girlfriend with your obvious lack of knowledge of basketball’s game within the game – the nut game.

Carmelo Anthony let the cat out of the bag in this summer’s London Olympics, drawing attention to a grave trend in the sport that may one day lead to NFL-like lawsuits from former players complaining about life-long swollen and inflamed testes.

In a preliminary Olympic matchup, the US’s Anthony pulled up for a three. Luis Scola, playing out of the four for Argentina, ran right up on Anthony and, as you can see in the slow motion replay, backhands the twins.

And it’s good! Anthony, the pure shooter he is, let off a three-point nut shot for Team USA.

But for all the swell in media attention, and Anthony’s pants, this play didn’t really take a lot of sack, and so it is low on this list of low blows. The play is apparently so rare, that it actually happened again!

So here, my friends, is best of the NBA Nut Shots Playbook.

LeBron James, the NBA's current best player and a champion member of the Miami Heat, removed the nut shot from his arsenal after it went awry one time back in high school. The fateful play was captured on video.

Here, LeBron, No. 23 in gold, attempts to straddle the ball away from the opposing point guard in the ol' halfcourt hump play.

This is the classic, most widely used testicular play in the NBA today, and one that appears several times in the top 12: The Out-of-Bounds Ballsac Bounce.

Gerald Wallace employs it to perfection here on Caron Butler, preserving the ball for the Portland Trail Blazers.

One of the big sticking points between the Orlando Magic's Dwight Howard and head coach Stan Van Gundy was a disagreement over incorporating nut shots into the offensive scheme.

Once Howard discovered Van Gundy's adamant stance forbidding the usage of gonads on the court, that's all he wanted to play with.

The Magic mutiny had even spread to the coaching staff.

This fan video clearly shows conspirators Dwight Howard and and assistant coach Patrick Ewing practicing the groin bounce pass with forward Hedo Turkoglu, all on the down low.

It's not just about getting a leg up on the competition. There's plenty of room for gentlemanly sportsmanship, no matter the sport and no matter the play, in the nuanced niche of the nut game.

Sometimes players get too deep though, like sharing an ice bath in football, or all that ass-patting in baseball, or in basketball, when you touch an opposing player's junk in too friendly a manner...not that there's anything wrong with that.

Pau Gasol gets his, though, on the receiving end of one of Phil Jackson's trick plays, the reach-around pick, deftly demonstrated here with Kobe Bryant.

As the Magic's Mickael Pietrus will contend, there's just no defending such a play.

According to rumor, Ray Allen's relationship with Rajon Rondo was testy to say the least. It was a friction, in fact, that would eventually lead to Allen pulling out of Boston.

The word on Rondo is he is quirky, performs irritating in-game rituals and too often and too easily says what's on his mind. He's an NBA outcast.

But no one can deny Rondo's handling of dimpled balls. Here he saves the Celtics, passing to Anderson Varejao's pelotas.

It's inevitable things will get dirty when whipping out the below-the-belt game, especially when you put it in the hands of one of the dirtiest players in NBA history, Kevin Garnett.

Garnett gets a little too intimate with Channing Frye, laying down a late love tap - long after the ball was released. That's an unwritten no-no in the rules of nut ball.

Of course Luis Scola,who brings one of the best nut games in the business, and who clocked Carmelo Anthony's cojones earlier, is a master of the Out-of-Bounds Ballsac Bounce, and boasts the third (and best) of its kind on the list.

The expertise with which Scola, who vehemently denies any nut play, precisely angles the basketball off Kevin Love's facets to maintain possession betrays a life-long dedication to that private part of his game.

In perhaps the most egregious usage of the nut game, one that pushes the envelope of what is acceptable in public, Reggie Evans slyly applies "the jerk" on an unsuspecting Chris Kaman.

Evans was immediately called for the flagrant feel.

You have to love a leader who gets in the trenches with his men, and in the NBA, a coach who rolls up his sleeves and "takes one for the team."

Far from being a stiff sideline observant, the San Antonio Spurs' Gregg Popovich, one of the greatest coaches in NBA history, takes time out mid-game to demonstrate with veteran Terry Porter how to keep one's nads on the ball.

And so we have reached the No. 1 nut shot play in the book, and it's a rare one, requiring Karate Kid-like balance.

You'll miss it at first, and it's a bit fuzzy, but in the replay you will see Danny Granger's ninja move to Antawn Jamison's nether regions.

Pay close attention and you can also see Jamison's testicles briefly pop out his nostrils. Yee-Ouch!