Best Quotes of The Walking Dead 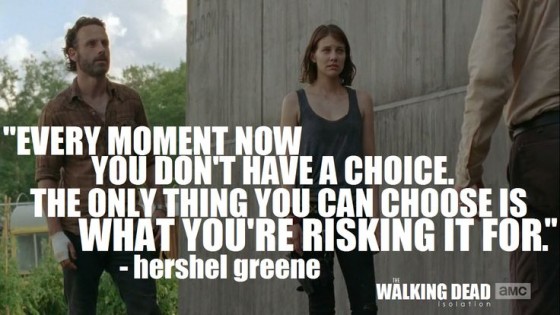 AMC’s mega-hit TV show, The Walking Dead, has become cable television’s most watched program and they just completed a sixth season. Robert Kirkman, the creator of the original comic book series by Image comics, has already said the show can continue through 12 seasons, easy. Despite pissing off fans with cliffhangers, we don’t expect those dominating numbers to fall anytime soon. The show is gritty, scary, and most importantly, it is all believable. The show prides itself on realism and that is part of its appeal to fans.

During The Walking Dead’s six seasons, there have been some amazing lines spoken from almost every character on the show, and we decided to compile a list of our favorites for your enjoyment today. Try not to laugh too hard or shed any tears as you relive some of the shows most amazing lines from all six seasons. Enjoy.

“If I had known the world was ending, I would have brought better books.” – Dale (Season 2, Episode 5)

“A bowman. I respect that. See a man with a rifle, he could have been some kind of photographer or a soccer coach back in the day. But a bowman’s a bowman through and through.” – Joe (Season 4, Episode 13)

“When you were, uh, pouring the Bisquick, were you trying to make pancakes?” (Season 6, Episode 11)

“Well, look at me. You didn’t see Reg the night he got it. That was a mess. And Pete. His face just blowing up like Pompeii right when we were cheek to cheek. I still think I got some of his brains in my ear.” (Season 6, Episode 1)

“I’m well aware it sounds bananas. But looking at the fossil record, knowing what I know about this infection, you cannot say for certain it isn’t what killed off the dinosaurs. Now, do I believe that’s what happened? No. But it’s enjoyable as hell to think about an undead ankylosaur going after a diplodocus. That there is a video game worth a pre-order.” (Season 4, Episode 15)

“So you’re aware, I’m on record as stating that I should not be here. You well know that I’m not combat ready or even for that matter combat inclined.” (Season 5, Episode 14)

“There’s walkers in the barn and Lori’s pregnant.” (Season 2, Episode 6)

“I think we should make some new rules before they get back. I hereby declare we have spaghetti Tuesdays every Wednesday. First we have to find some spaghetti.” (Season 4, Episode 5)

“I can’t profess to understand God’s plan, Christ promised the resurrection of the dead. I just thought he had something a little different in mind.” (Season 2, Episode 13)

“I’ll bake them a cake, with pink frosting. Would they like that?” (Season 3, Episode 7)

“Maybe these people need somebody like me around, huh? Do their dirty work. The bad guy.” (Season 3, Episode 15)

“Yeah, you see eleven condoms; I see eleven minutes of my life I’m never getting back.” (Season 2, Episode 5)

“People with nothing to hide don’t usually feel the need to say so.” (Season 3, Episode 5)

“You talk about the weight of what you have to do, how you can handle it. A bad man, someone truly evil? They’re light as a feather. They don’t feel a thing.” (Season 3, Episode 15)

“Got bit. Fever hit. World gone to shit. Might as well quit. Dumb-ass didn’t know enough to shoot himself in the head.” (Season 2, Episode 3)

“I ain’t going to have your first drink be no damn Peach Schnapps.” (Season 4, Episode 12)

“Today’s your lucky day, fellas. You’ve been pardoned by the state of Georgia, you’re free to go.” (Season 3, Episode 2)

“Like I said, you earned it. But for what it’s worth, you see mistakes. I see when the shit hits, you’re standing there with a shovel.” (Season 4, Episode 2)

“Toughest asshole I ever met, my brother. Feed him a hammer, he’d crap out nails.” (Season 1, Episode 4)

“Enough risking our lives for a little girl who’s GONE!!! Enough living next to a barn full of things that are trying to kill us!! Enough! Rick, it ain’t like it was before!! Now, if y’all wanna live, if y’all wanna survive, you gotta fight for it!! I’m talking about fighting, right here!! Right now!!” (Season 2, Episode 7)

“Hell, when you really look at it in the cold light of day, you’re pretty much dead already.” (Season 2, Episode 7)

“We tried to kill each other, man. What did you think, we gonna forget about it all, we’re gonna ride off into the sunset together?” (Season 2, Episode 12)

“Well maybe we oughta just think that through. See, if I’m the kind of man that would gun down his own best friend, what’d you think I do to some guy I don’t even like when he starts throwing accusations my way. What’d you think?” (Season 2, Episode 6)

“There’s us and the dead. We survive this by pulling together, not apart.” (Season 1, Episode 2)

“You want to kill me, you’re going to have to do better than that wrench.” (Season 2, Episode 10)

“You’re the town drunk who knocked over my fence and ripped up my yard, nothing more.” (Season 3, Episode 13)

“I guess I’m losing hope that you can hear me, but there’s always that chance isn’t there? That slim chance. It’s all about slim chances now.” (Season 2, Episode 1)