Humor > Pop Culture > The Best Robots from the Seventies

The Best Robots from the Seventies

Who likes ROBOTS? Everybody, that’s who! Think it over: without some kind of robot, most of us wouldn’t know what to do with ourselves! Our cars have robotic-type brains, our cell phones are operated by probably some kind of satellite robot, and we have Roombas to vacuum up our shame! Robots! But even so, Robots had their heyday, and it really isn’t the present because the only “real” robots we see are those autonomously making vehicles and vehicle parts. No one has a Rosey, and no one has a Bender. As much as we’d all like one.

Well, what was the Robot Heyday, anyway? You might be asking yourself. Settle down, we will tell you, jeez. Basically, the decades from the ’50s (picture all those goofy Sci-Fi flicks with killer robots from space) through the ’80s (Transformers, Voltron, Robotech…), but it’s the ’70s we really want to focus on this time. Why? Because the ’70s were groovy, that’s why. With their awesome cartoons, coo-coo crazy toys, and just some of the greatest robots of all time. Let’s check ’em out! 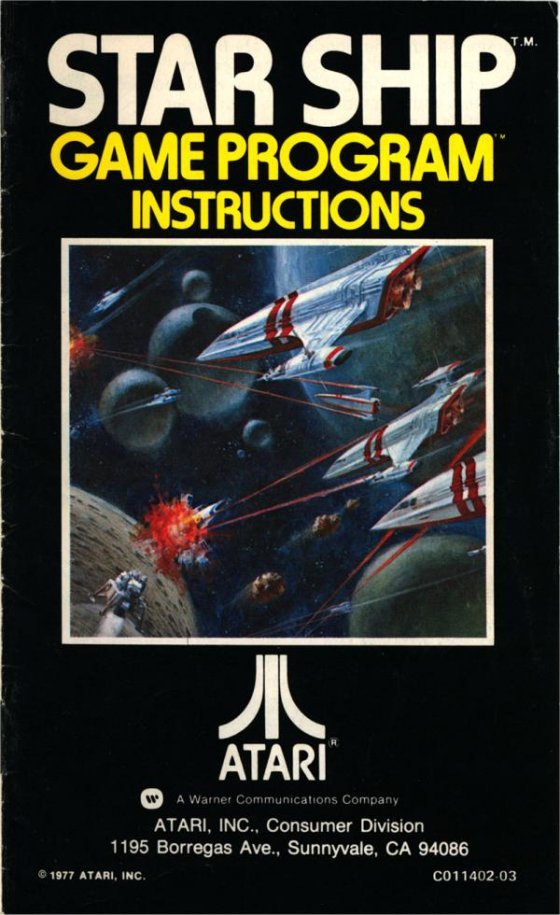 The Atari 2600 was released in 1977 and it became a pretty massive thing for fans of arcades. The fan base grew exponentially in the following months of its initial release as more and more titles hit the store shelves. But what we’re concerned about here are video games specifically revolving around robots. So were there any? Well, there were a few, since we’re sticking with the ’70s theme here. First, there was Breakout, released in 1978. This featured the robotic paddle that ricocheted a ball back to a brick wall at the top. Next, we have Star Ship from 1977 which features you, the ship, destroying as many enemy robots as possible. And really, that about covers it. Apparently, there really weren’t that many. Oh well. 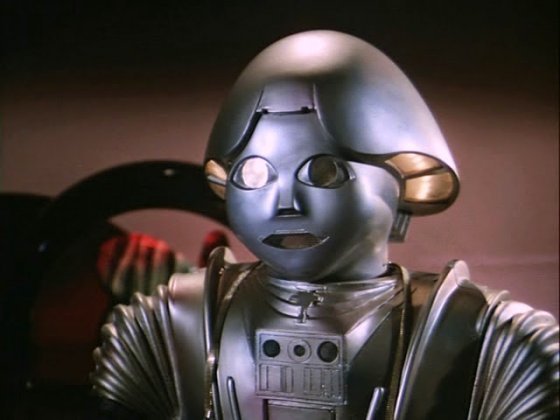 Buck Rogers hit the air in 1979 and was based on a 1928 comic series by Philip Nowlan. It starred Gil Gerard and Erin Gray and did a fine job of using a prototypical Star Trek television formula by creating some pretty cool space battles and life beyond the stars. The biggest difference was the fact that Rogers was a man out of time (do I smell Captain America here? Nah…) and was in stasis for 504 years, so his existence in the 25th century was as bizarre for him as it was for us. Buck learned his day-to-day stuff aided by Colonel Wilma Deering and the pugnacious and incredibly irritating robot, Twiki. Even though it was blatantly a robot, they were called Ambuquads. Okay. Sure. But Twiki was Twiki and though he was more underfoot than actually useful, he was however voiced by the amazing Mel Blanc. So there’s that.

The Black Hole was 1979 Disney’s version of Star Wars long before Disney actually had its own for real Star Wars. Starring Anthony Perkins, Robert Forster, Ernest Borgnine, and the voices of Roddy McDowall and Slim Pickens, the film takes place in deep space on the ship Palomino on a return mission after an extended voyage. Soon they encounter the Cygnus docked outside a black hole. The Palomino’s crew board the long-lost ship and discover its inhabitants are mostly robotic, including the sinister Maximillian, and two service robots, V.I.N.CENT and Old B.O.B. The rest plays out like an escape and an attempt to flee the forces of (DUN DUN DUUUUUN!) the Black Hole! 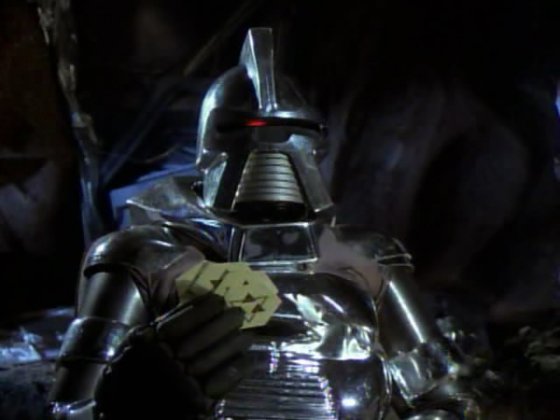 The TV series began its run in 1978 and featured the remainder of the 12 Colonies of Mankind against the sinister and evil Cylons who were created by a race of reptilians who had long since been destroyed by their own creations. The starship Galactica has chosen to escape the colonies with its ragtag band of fighters in search of a new home. Led by Adama (Lorne Green) and the likes of Apollo (Richard Hatch) and Starbuck (Dirk Benedict), they spend their days doing… dramatic things and fighting THE CYLONS! Yeah! And let’s not forget that chimp-in-a-robotic-dog-suit, Daggit. He was something, wasn’t he?

The Doctor Who Robots 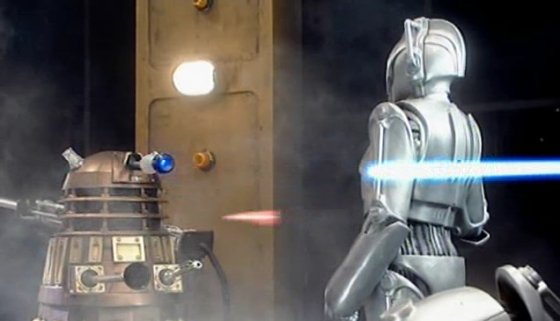 Before the ’70s, Doctor Who had been around for a few years. In fact, the entirety of the decade was encompassed by Doctors 3 (John Pertwee) and 4 (Tom Baker), and each had his own adventures with a series of robots up to and including The Daleks, The Cybermen, The Autons, and the heroic dog robot called K9. 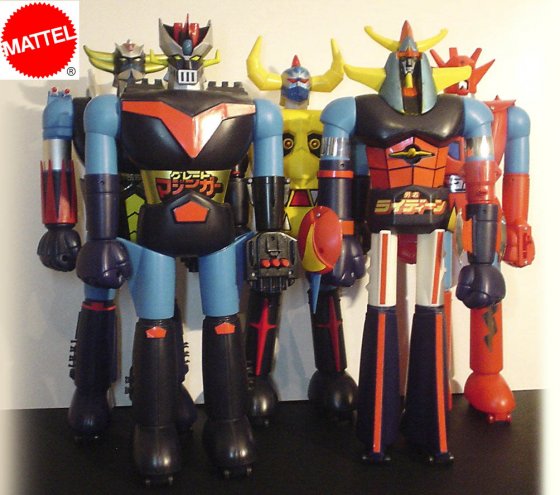 In the mid- to late ’70s, a series of robot toys was released that featured 24-inch autonomous monstrosities designed to dwarf all of your other pathetic toys. They were the Shogun Warriors and they were huge! Each of the 16 robots original designs featured spring-loaded launching parts such as heads, fists, weapons, and rockets, however, these potentially dangerous designs were eventually fixed so that they no longer launched anything and was definitely a large part of the line’s cancellation. During the latter part of the ’70s into the early 80’s, Marvel Comics released a series of comics about the Shogun Warriors where they did battle with the likes of such favorites as the Fantastic Four. 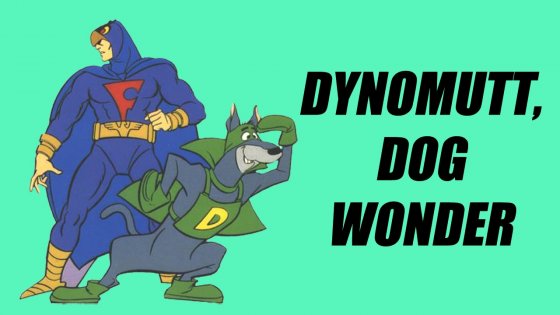 Though Hanna-Barbera had great luck with such robotic classic cartoons from the 60’s like Frankenstein Jr. (a huge robot that looked a little like the titular Horror Monster and was piloted by a little kid with obvious delusions of grandeur) and Gigantor (another huge robot piloted by yet another kid, only this time with roots in Japan), the ’70s featured some pretty silly and spectacular robot-themed cartoons of its own. With the likes of DynoMutt, The Robotic Stooges, and Speed Buggy (yes, a Scooby-Doo-type dog chock full of gadgets who would hang around superhero Blue Falcon, and Moe, Larry and Curly as their robotic selves from the future, and a sentient dune buggy with wit and charm), there wasn’t much the decade at H-B wouldn’t turn into Robots. 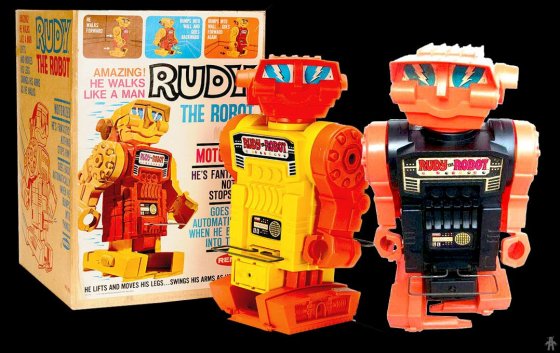 If it was robots you really wanted, toys were the way to go. The ’70s was a decade just coming off a time when American’s conquered space and we all stood in awe as to what the future held. Were there spacecraft heading our way filled with alien organisms that looked suspiciously like Micronauts, Rock ‘Em – Sock ‘Em Robots, Rudy The Robot, TV Robot, Space Robot, or Mr. Brain? Maybe. But probably not. Even so, it didn’t stop the minds and imaginations of those responsible for creating amazing toys whose likenesses we could only dream about. Okay, granted some f them were pretty silly and more awesome than truly terrifying, especially Rudy. What the Hell was that all about?

The Other Movie Robots

Though the “Robot Movie” carried over pretty well into the ’70s, the decade didn’t really adapt the “Cosmic Sci-Fi” of the 50’s and 60’s. Maybe it was because we all eventually began to figure out that giant mechanical men from beyond our Solar System were probably not going to invade Earth. So, with that sudden realization, the films featuring robots became a bit more Dystopian, a bit more What If? and even more, “Let’s send a robotic clone after Godzilla”. Hey, if it ain’t broke, right? A few of the movies that came out in the seventies that featured robots in every form ranging from evil sentient law enforcement to red-eyed keepers of the ship to Fembots. Make sure to check out: Silent Running (1972), Westworld (1973), Godzilla Vs. Mechagodzilla (1974), The Stepford Wives (1975), Terror of Mechagodzilla (1975), Logan’s Run (1976). 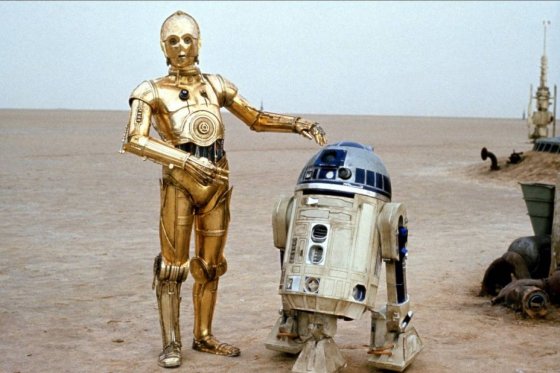 And here we have reached the pinnacle, the zenith, the… big top part. Look, what I’m saying is if you were even remotely interested in ROBOTS in the ’70s, Star Wars (1977) was your Mecca. From almost the word go, we see droids (yeah, pretty much robots, Lucas, though we appreciate what you did there) C-3P0 and R2-D2 escaping the Tantive IV in a pod bound for the surface of Tatooine. Soon thereafter we are invited aboard a Sandcrawler piloted by Jawas and witness their garage sale of cargo that includes nothing but ROBOTS in various forms of functionality. Moisture vaporating bots, Astromech bots that assist in piloting the Rebel fleet, little Mouse Droids skittering hither and yon, and even communication bots milling around the Death Star. ROBOTS were everywhere! You almost couldn’t swing a dead Jedi without hitting one. What, too soon?