The Best of Warner Brothers

Warner Brothers is celebrating their 90th Anniversary in style this year, by releasing some of their best movies in box sets. Earlier in the year they released a set of 50 movies on Blu-Ray and a set of 100 movies on DVD. This video shows of some off the epic films that have come from the studio :

That’s a ton to swallow all at once, and also a bit pricey, so they broke the set into multiple categories, and have been selling them separately in collections of twenty films each. 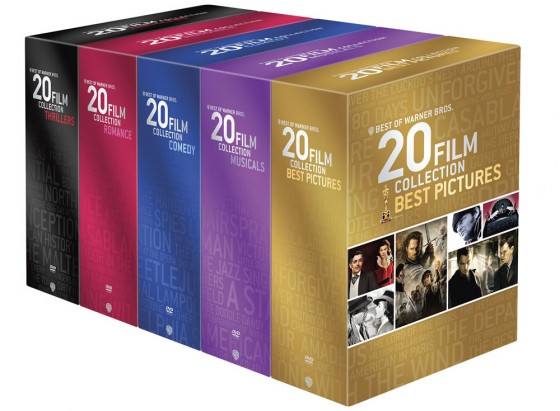 The Thrillers Collection hits store shelves today, and we were recently sent a copy to review. Combined they earned 12 Academy Awards, and the full list of movies in this set includes :

That selection of movies is pretty incredible, and most are certainly essential for your movie collection, with one major issue. We’ve moved on to Blu-Ray or digital at this point, and we assume most of you have as well. If you are still working on building a DVD collection (so last decade), then you likely have many of these titles already. The list includes so many seminal movies that your collection would be fairly deficient if you didn’t already own at least half of these. So while we certainly find the set awesome, we have to question who the market is for such a release.

Notably the packaging does provide one major benefit, size. They have managed to pack 20 discs into the space that 4 DVDs would typically take up on your shelf. You’ll also avoid those crappy snapper cases that WB used to sell these movies in. So if you find yourself in the situation where you want to start or grow your movie collection quickly, The Best of Warner Brothers is certainly a good place to look.