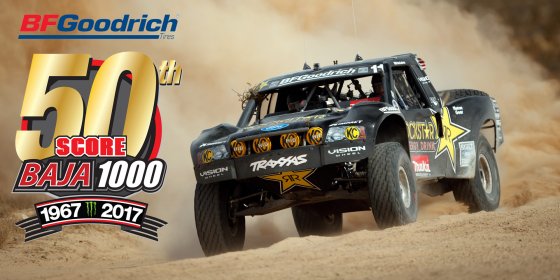 BFGoodrich Tires have been dominating in the desert since 1980, when they won their first overall Baja 500 victory. BFGoodrich Racing has won 89 overall SCORE Baja races, 28 of them at the SCORE Baja 1000. As SCORE celebrates the 50th anniversary of the Baja 1000, BFGoodrich is celebrating their own 40 year history with the sport, and will be a Title Sponsor of the event which begins on Tuesday. To up the ante in honor of that 50th anniversary, BFGoodrich is offering a contingency prize of $50,000 to the overall winning team, if they are riding exclusively on BFGoodrich tires. 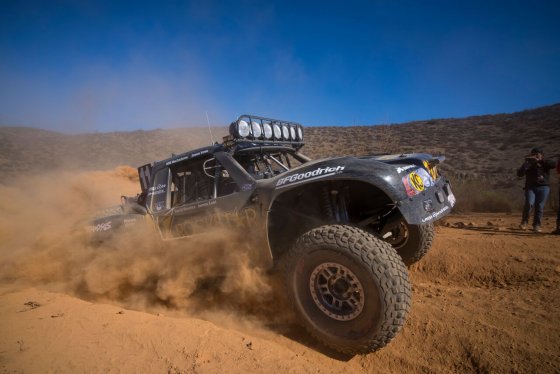 That contingency has a fairly good chance of happening too, as the best drivers in the world choose BFGoodrich rubber for their trophy trucks. Rob MacCachren is the most decorated off-road racer in history, with more than 300 total victories. MacCachren rides with BFGoodrich, and is seeking his fourth consecutive win at this week’s Baja 1000. His trophy truck will ride on 40-inch BFGoodrich Baja T/A ® KR3 tires.

Fans can follow Rob’s quest for a 4th consecutive victory at the SCORE Baja 1000 with real-time tracking at http://www.score-international.com. BFGoodrich will be on the ground covering the race on its social media channels, so keep up with the action on Facebook, Twitter, and Instagram. 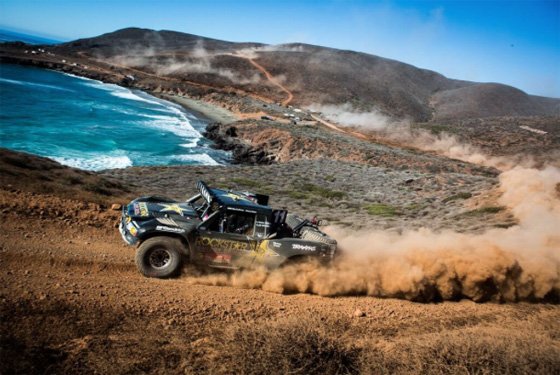 We recently met Rob MacCachren in Las Vegas, where BFGoodrich hosted us for SEMA 2017. They invited us to experience for ourselves what makes their tires so dominant in the desert with an entire day running part of the Mint 400 course with Rob MacCachren. Check out the video at the bottom of this article for highlights of that experience. We rode and drove on three different types of BFGoodrich Tires; Ford Raptor (All-Terrain T/A KO2), Polaris Razr (Baja T/A KR2), and Rob’s Pre-Runner truck (Mud-Terrain T/A KM3).

Each vehicle obviously has their strengths, but they all gobbled up the variable desert terrain with ease. Using the punishing Baja desert as a real-world research laboratory and proving grounds for the past four decades has not only helped their racing tire development, but it has increased their consumer product performance as well.

We concluded the trip by watching Rob Mac qualify 2nd for the Baja 1000 under the lights, which is right where he wants to be. Just the day before, Rob informed us that he strategically prefers not to qualify in the top spot, as he likes someone else to be the guinea pig on the unpredictable terrain, and have other trucks to chase down.

Watch our quick video below for much more from our trip to the desert with BFGoodrich. It features scenes from their area at SEMA, some clips from our day on the Mint 400 course with MacCachren, and a brief look at Baja 1000 qualifying under the lights.

Are you pumped now for the Baja 1000 like we are? Good luck to Rob MacCachren and BFGoodrich Racing!