Big Brother is Assigning you Homework 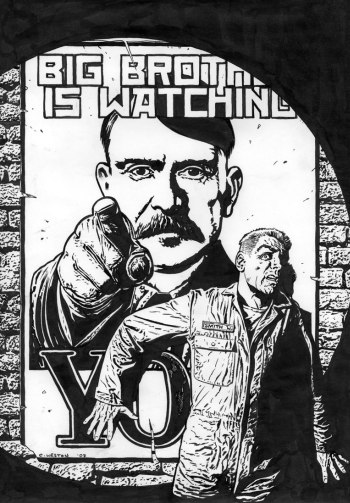 Subject #120192! You have not completed your algebra homework!

So, Lower Merion, a rich Philly suburb (yes, they do still actually exist), issued its students laptops. Aw, how nice of them. And very progressive, too, making sure the students have the tools to do their work. And also peep on them!

Apparently completely unaware of just how stunning creepy spying on children is, the vice principal of the school punished a student for “improper behavior in his home” and produced a photo from the laptop’s webcam as evidence.

First, did it strike these guys, like, at all, that their authority doesn’t really extend beyond school grounds? As in the kid could be doing bong rips while banging sheep and as long as it’s not on school turf, they have about as much authority over it as Steven Seagal has control over his ego?

Second, at no point did it strike them that turning on a webcam to spy on teenagers is, oh, we don’t know, really freaking creepy and perverted? Good God, guys, you want to see a hot eighteen-year-old strip, just pay for it on a credit card the wife doesn’t see, like everybody else.