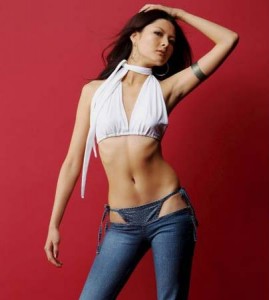 From the latest in hooker-wear comes Bikini Jeans, a design by Sandra Tanimura of the Sanna company, which hails from Brazil. Apparently Tanimura came up with the idea after customers asked for continuously lower rise pants. The one design problem of such a concept is the difficulty of keeping the low rise pants up. Enter the bikini jean and its curiously sparkled tops. The design takes ultra low-rise, crotch-clutching jeans and adds in a built-in bikini bottoms.

While you may think this design is a great idea from a guy’s perspective and certainly might not be out of place in Brazil, a country made famous for its hordes of svelte, cellulite-free glamazons, I have doubts as to how they’d look on the average person. Unfortunately, my fear is that the only people probably wearing them will be those with fat sticking out of all the openings. Well either that or shameless Z-list celebrities. Either way it’s not an enticing thought.

While the jeans may be made in Brazil, they are largely sold in Japan. But if you’re looking for a pair, fear not, as they are also sold online. However, if you don’t want to shell out $100 or so, you can always go the old fashion route, and just go with a thong peeking out of your pants. It’s an acceptable substitute. Here’s one example: 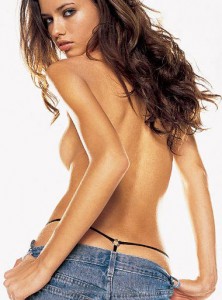 Click here for a few more photos of the bikini jeans.