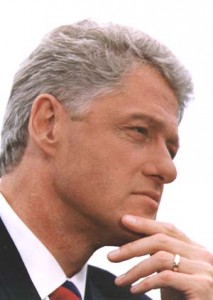 The following is the most recent official list of the top five most memorable inaugural speeches in the United States history. Bill Clinton is the only living former president to be featured on this list, and his inaugural speech made in 1993 is now the fifth most memorable. If Barack Obama, who’s already proven to be a very good writer even before running for president, is able to make his inaugural speech one of the most memorable, then Clinton’s memorable speech will go into the toilet before he can carry this honor till the day he dies. Of course, Bill is still relatively young, and there are going to be more future presidents ahead before he needs to worry about death, but a president as literate as Obama doesn’t come quite often. The public expects Obama to give an excellent speech tomorrow, but is it going to be enough to knock Clinton off the list? We’ll find out in roughly 12 hours.

5. “Our democracy must be not only the envy of the world but the engine of our own renewal. There is nothing wrong with America that cannot be cured by what is right with America.” — Bill Clinton’s inaugural address on Jan. 20, 1993.

4. “With malice toward none, with charity for all, with firmness in the right as God gives us to see the right, let us strive on to finish the work we are in, to bind up the nation’s wounds, to care for him who shall have borne the battle and for his widow and his orphan, to do all which may achieve and cherish a just and lasting peace among ourselves and with all nations.” Abraham Lincoln’s second inaugural address on March 4, 1865.

3. “In the long history of the world, only a few generations have been granted the role of defending freedom in its hour of maximum danger. I do not shrink from this responsibility — I welcome it. I do not believe that any of us would exchange places with any other people or any other generation. The energy, the faith, the devotion which we bring to this endeavor will light our country and all who serve it — and the glow from that fire can truly light the world.” — John Kennedy’s inaugural address on Jan. 20, 1961.

2. “It is no coincidence that our present troubles parallel and are proportionate to the intervention and intrusion in our lives that result from unnecessary and excessive growth of government. It is time for us to realize that we’re too great a nation to limit ourselves to small dreams. We’re not, as some would have us believe, doomed to an inevitable decline. I do not believe in a fate that will fall on us no matter what we do. I do believe in a fate that will fall on us if we do nothing. So, with all the creative energy at our command, let us begin an era of national renewal. Let us renew our determination, our courage, and our strength. And let us renew our faith and our hope.” — Ronald Reagan’s first inaugural address on Jan. 20, 1981.

1. “Democracy is not dying. We know it because we have seen it revive — and grow. We know it cannot die — because it is built on the unhampered initiative of individual men and women joined together in a common enterprise — an enterprise undertaken and carried through by the free expression of a free majority. We know it because democracy alone, of all forms of government, enlists the full force of men’s enlightened will. We know it because democracy alone has constructed an unlimited civilization capable of infinite progress in the improvement of human life. We know it because, if we look below the surface, we sense it still spreading on every continent — for it is the most humane, the most advanced, and in the end the most unconquerable of all forms of human society.” — Franklin Roosevelt’s third inaugural address on Jan. 20, 1941.