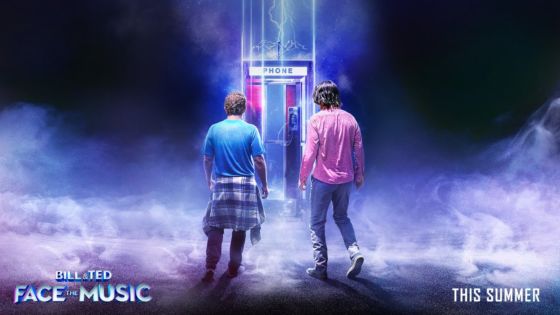 If the world could be gifted a million more movies like Bill & Ted Face the Music, it could be the cause for celebration and peace among the nations. Not only is it a welcome blast of nostalgia, it is an eager call for unity amid calamity like none other. Make no mistake, there is not one reference to any kind of political strife; instead, it’s a film locked in its own world, continuing the same easygoing, whimsical spirit of the 1989 original. Of course, there are cares to be had, but this one’s a little larger than just failing a high school history class. This is more of a plea for humanity to get back to square one, to work together as a whole to save ourselves – and, possibly, all of time and space. 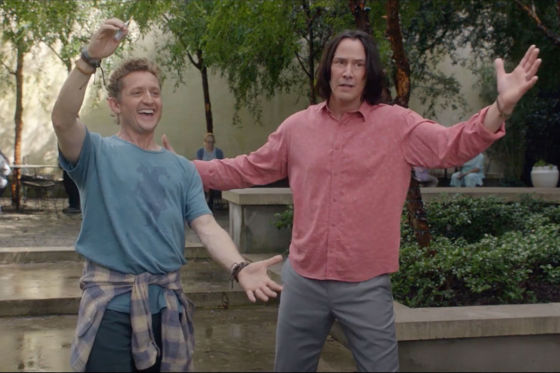 Yup, those are the stakes as told by The Great Leader (Holland Taylor) to Bill S. Preston (Alex Winter) and Ted “Theodore” Logan (Keanu Reeves) 700 years in the future. Sure, they’ve been ordered to ace their history presentation and to play an epic show, but those were always just the narrative thrusts of the preceding films. Remember, Rufus (George Carlin) originally said at the end of the first film: “Your music will help put an end to war and poverty. It will align the planets and bring them into universal harmony, allowing meaningful contact with all forms of life, from extraterrestrial beings to common household pets. And… it’s excellent for dancing.” 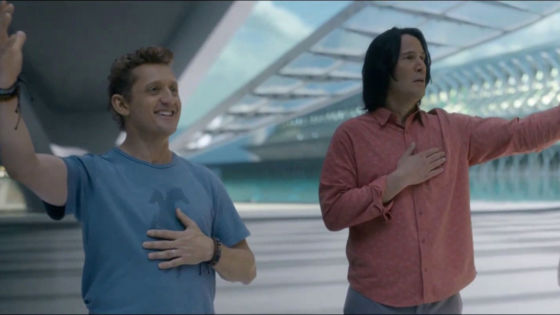 Trouble is, he didn’t say when or what specific piece of music would create this utopia. In the years since they played the San Dimas Battle of the Bands, their music hasn’t done anyone any favors. During that time, as The Great Leader puts it, Wyld Stallyns went from playing a legendary show at the Grand Canyon to playing a “$2-dollar Taco Tuesday” night. Their CD sales have gone from multiplatinum to the 99-cent bin. Needless to say, none of their music has caused any planets to align, much less alleviate any kind of suffering. But a visit from Rufus’ daughter Kelly (Kristen Schaal) brings them even worse news: they’ve only got 78 minutes to write a song and play it at a specific time and location or the universe will collapse upon itself. How are our favorite slackers – now adultslackers burdened with familial responsibilities (but no real jobs) – going to pull this off? Instead of doing the work, they get the bright idea to steal the song from their future selves and bring it back. 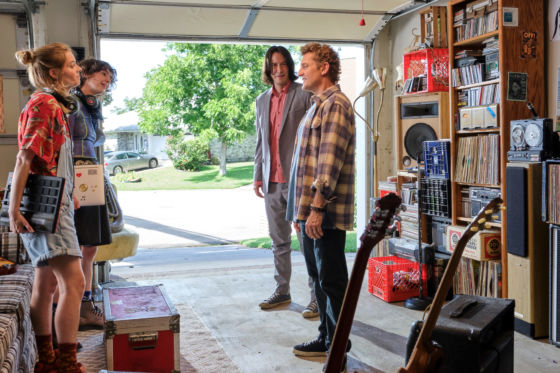 Winter and Reeves step back into their breakout roles with gusto, yet take care not to push them completely out of the realm of believability. Indeed, Bill and Ted are SoCal caricatures, but it isn’t that they’re not trying, nor are they willingly evil or mean-spirited. This is the precarious line both actors walk time and again with surety and without overdoing it. No, their performances establish their characters as energetic treasure hunters on seemingly endless search, optimistic in every endeavor but also having some sense to see that it’s not going anywhere. 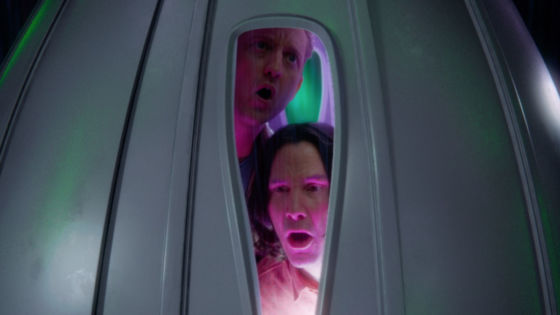 “Not going anywhere” could be said about their families as well. Their princess-wives Joanna Preston (Jayma Mays) and Elizabeth Logan (Erinn Hayes) are the breadwinners, yet they can’t be separated from each other due to their husbands’ need to constantly be together. Their houses are attached by a garage (where they’ve still got their instruments set up), and the men totally misunderstand the notion of “Couples’ Therapy” being a one-at-a-time thing. Daughters Theodora “Thea” Preston (Samara Weaving) and Wilhelmina “Billie” Logan (Brigette Lundy-Paine) are 24 years old and still living at home with no jobs to speak of (much like their fathers). 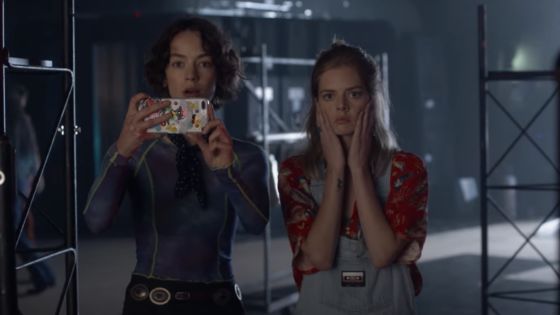 Bill and Ted’s inherent goodness has definitely passed down through the generations, ‘cause once Thea and Billie get wind of what’s happening, they don’t hesitate to lend a hand. Taking a cue from their fathers, they hop into into Kelly’s time-travel pod (a little more aerodynamic than the phone booth, demonstrated in a few humorous asides), go back through time, and set about arming their parents with a collection of exemplary musicians. While both of the earlier films share a little bit of their plot points with Bill & Ted Face The Music, it’s not doled out in an overtly comedic, insulting, or hipster-ironic fashion. It’s done with genuine love for the two characters and their shared history, and it’s a heartfelt way of handing the reins over to the gender-reversed versions of themselves, knowing when to step back and be ready to throw in when needed. 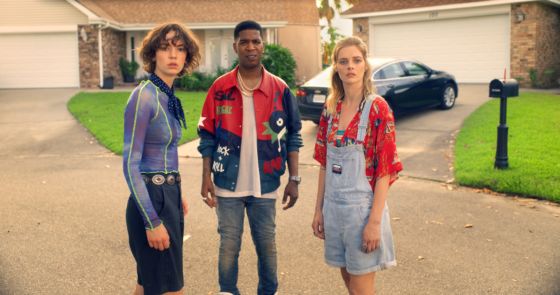 It may be Bill and Ted’s name on the movie, but Thea and Billie rival them in every way with all the spark-filled tone of the characters we met back in 1989. Both Weaving and Lundy-Paine bring terrific smarts and nuance to these roles, with Lundy-Paine delivering a sincerely knockout performance, never once trying to goof or cross the line into ostentatiousness. Instead, they (Lundy-Paine uses they/them pronouns) play Billie as the kind to urgently throw caution to the wind while being accepting of whatever comes her way. There’s a curious strength they give to Billie, a muted energy that’s not bursting at the seams and begging to be let out, but rather an a natural undercurrent of power belonging to the guileless and the intrepid. 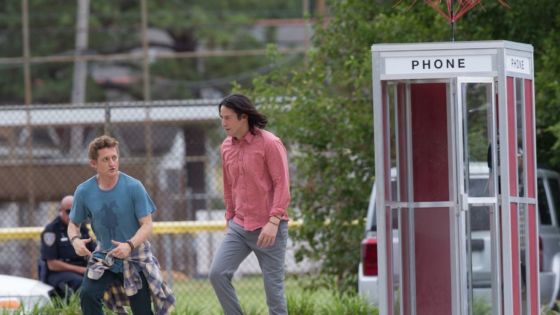 This well-contained, non-parodical vibe can be laid at the feet of director Dean Parisot, who also helmed one of the best Star Trek movies not in the official canon, Galaxy Quest. He carries the same bright and respectful treatment of forgoing legends to this franchise, as his choices never try to pull a fast one on us or thumb their nose at the Bill & Ted legacy – and that’s including the prison scene seen in the trailers. There were so many chances for Bill & Ted Face The Music to delve into stupidity for stupidity’s sake or go for the easy laugh, but Parisot’s avoidance of mockery is what makes the film as solid as it should be. 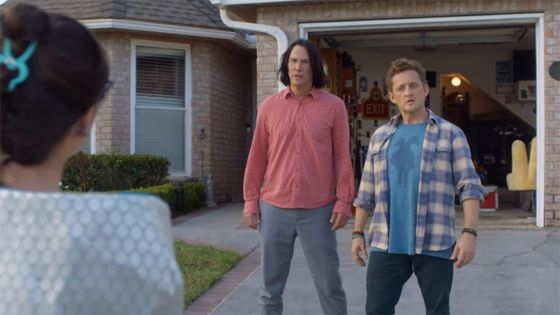 Even more solid is the presence of our guide, Rufus, through the Bill & Ted universe. Sounds weird, especially due to George Carlin’s passing in 2008, but he bears a heavy presence in this movie through Kelly, a fan of the legends her father helped become. Not only does she carry Rufus’ fervent belief in the boys, she also carries George Carlin’s daughter’s real name in his honor. (A fact that’s making me, a George Carlin devotee, weep as I write this.) Along with Parisot and Kristen Schaal (who yields none of the awkward tics prevalent in her usual roles), series writers/creators Chris Matheson and Ed Solomon grant Kelly the same firmness her father had, both in manner and in the hope that these two dimwits will rise above the challenges facing them. 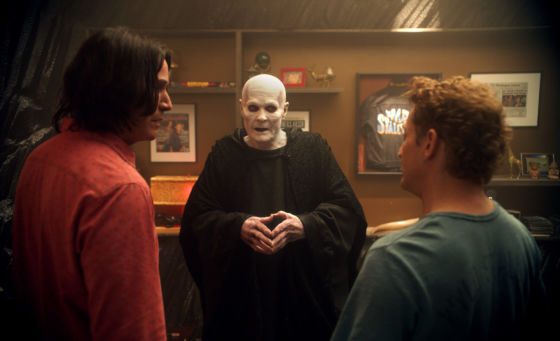 Will they write the song? Honestly, it’s a moot point. What matters is how the team works as one for survival on a universal scale and the hijinks everyone gets up to on this mission. It’s also that for a short 91 minutes (stay past the credits, kids), we’re back where things are all right again because Bill and Ted are on the case. Even their former bassist Death (William Sadler) gets in on the action, and although their definition of “music” may cause some wincing and raucous laughter, they’ve still got it where it counts – in their hearts. Their heads may be another battle altogether, but that’s what makes us love them – they turn their slackerdom into a truthful look at themselves through the course trying to do the least amount of work. (Dude, they passed their history final by doing no research and played the Battle of the Bands by launching themselves forward in time to learn how to play their instruments.) 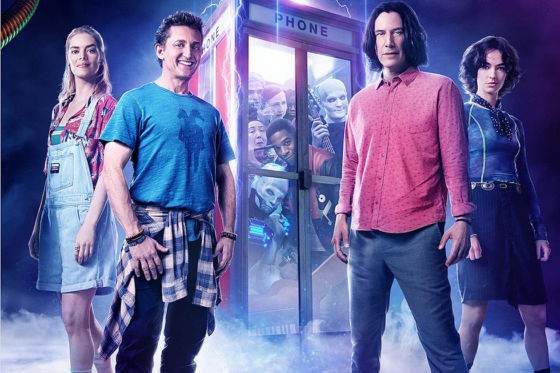 Bill & Ted Face The Music is an unexpectedly emotional film, anchored by a touching script and a steadfast adherence to a natural humanity. It’s a humanity which oozes from all involved, from the villainous robot sent to hunt Bill and Ted (as mentioned, references to the previous films abound) to the duo themselves. This is an appropriate film for an appropriate time in which we all expect our heroes to be supermen and our troubles to be easily defeated with a gun or a fist. While these savage times reign over us, it’s a refreshing thing to know there exists a movie which appeals to our better angels and promotes a wealth of goodwill. Bill & Ted Face The Music is that movie, stressing the values of working against the clock as a team, no matter if the brainpower comes from an unexpected source or how handily the film wraps it up – just so long as there’s unity in the struggle.

Bill & Ted Face The Music is an unexpectedly emotional film, anchored by a touching script and a steadfast adherence to a natural humanity.