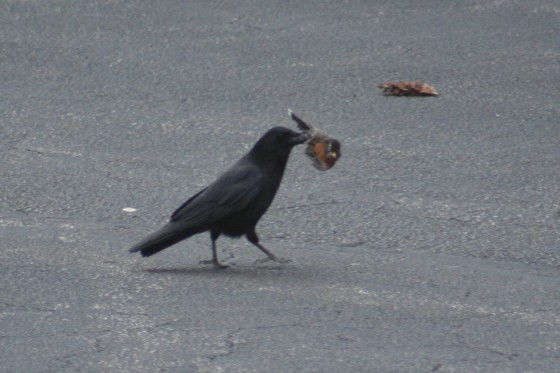 This morning we witnessed this drama unfold outside the Gunaxin offices, and thought we’d share it with you. The photos show a Crow (we’ll call him Brandon Lee) having a Robin (we’ll call him Chris O’Donnel) for breakfast. We’re going to assume that Brandon found Chris already dead, and didn’t actually do the killing, but maybe we’re just being naive. Apparently Brandon was having a bit of difficulty, as he was constantly picking up Chris and slamming him back down to the ground in a different position. Even more amusing was when he would pluck off a piece of Chris and put it down on the pavement, only to have the wind blow it away. Seeing a crow hopping down the street chasing robin bits made for an entertaining morning.

For the animal lovers in the crowd, don’t worry, we love animals too. We didn’t kill Chris O’Donnel, we’re just documenting nature. Get over it.