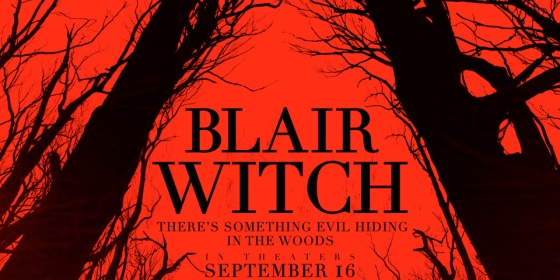 Earlier this year, Paramount Pictures announced 10 Cloverfield Lane a mere two months before its blockbuster March release. Taking a similar tactic, at the 2016 San Diego Comic-Con, film studio Lionsgate blew the world’s mind by announcing that their fall release The Woods was, in fact, a long-awaited sequel to 1999’s breakout found footage shocker The Blair Witch Project. Titled simply Blair Witch, the film was set for a September bow, right in time for the spooks to come out during the Halloween season. 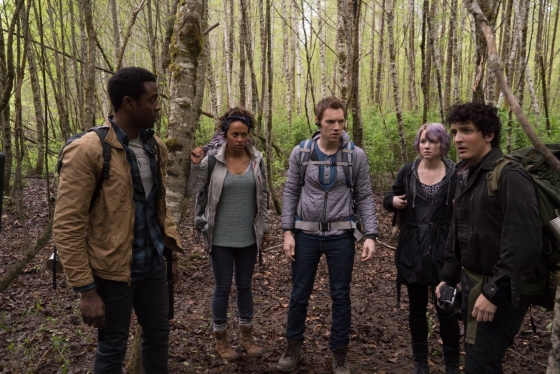 Let’s put it in blunt terms: Blair Witch is one scary, nerve-wracking son of a bitch. Equal parts sequel, reboot, and remake, Blair Witch takes the best of what worked in the original The Blair Witch Project and injects it with 21st century digital know-how. Gone is the “Hey, remember what that guy said the other day?” trite style of exposition; screenwriter Simon Barrett has pared this film down to a lean and absolutely mean, 89-minute, all-out assault on the senses. 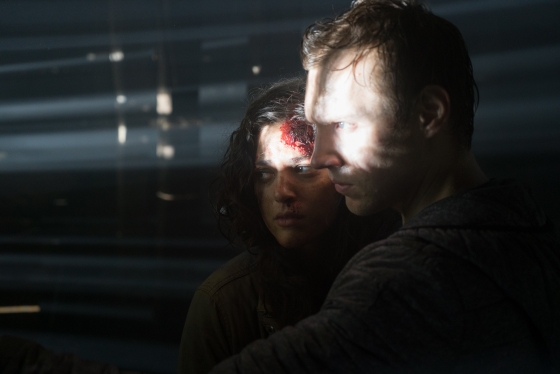 The film pins us to our seats and dares us to let go of our armrests, which – if you straight-up loved the original like I did – you’ll already be white-knuckling by the 20-minute mark. Motion sickness-prone viewers, be warned: there is very little respite from the first-person shakycam which so notoriously nauseated audiences in 1999. This time, the cameras have been updated from 16mm and Hi-8 video to all manner of digital cameras – a Canon digital SLR, a drone, and Bluetooth-style earpiece cameras with GPS capability. 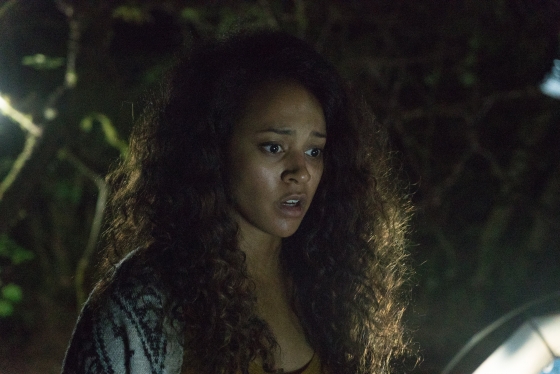 These are all used or worn by documentarian Lisa (Callie Hernandez) and her friends, James (James Allen McCune), Ashley (Corbin Reid), and Peter (Brandon Scott), as they travel into the Black Hills of Maryland in hopes of finding Rustin Parr’s house. Fans of the original will know this as the place where James’ sister Heather (Heather Donahue, not appearing in this film) disappeared with her film crew in 1994, when James was only 4 years old. 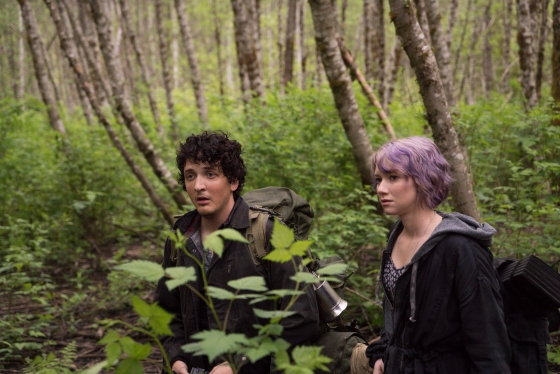 Spurred on after finding YouTube video showing someone screaming and running through Parr’s house, James and the other three track down the uploader, DarkNet666, who’s discovered to be two Burkittsville locals, Lane (Wes Robinson) and Talia (Valorie Curry from Fox’s “The Following”). They agree to show James where they found the video, with one condition: they get to go along on the trek to Parr’s house. 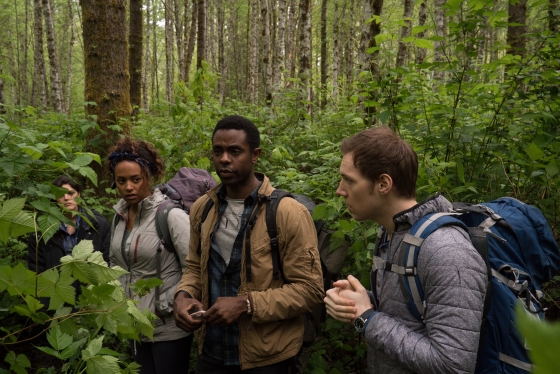 After reluctantly agreeing – especially after they see a Confederate flag hanging in Lane’s house, while African-Americans Peter and Ashley stare in horrified bemusement – the six make their way into the Black Hills, eventually encountering a lot of what happened the last time anyone with a camera went into this forest. 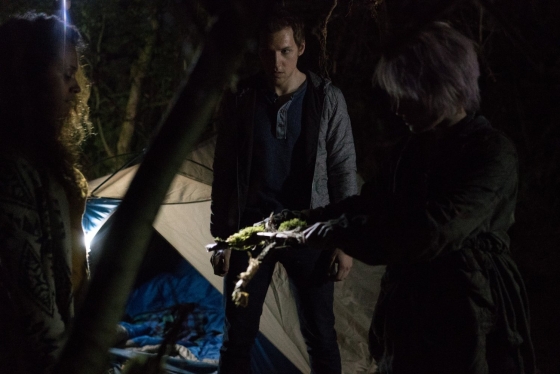 Director Adam Wingard, known for contributing to the found footage anthologies V/H/S and V/H/S/2, brings all of his trickery and sleight-of-hand skills to give Blair Witch a more frightening, in-the-now urgency to this revisit of the Blair Witch legend. He throws us for loops with misdirection and disorients us by playing mercilessly with time and space. Daylight, hours, days, compass directions, or GPS locators – none of this means anything when you’re in the Blair Witch’s woods. 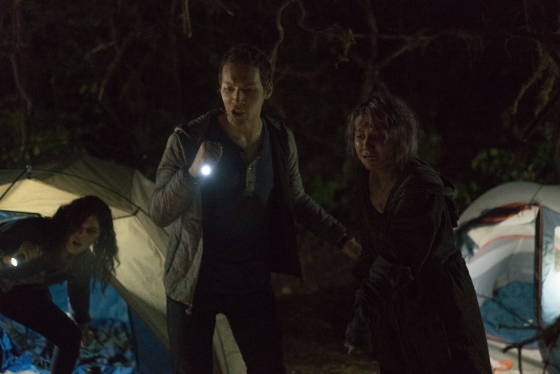 In making Blair Witch the brawny, digitally-pumped up brother to the analog original, Wingard’s use of glitching and ghost frames keeps us guessing as to where the cameras will start up next and what they’ll find once they’re in focus. The sound design is a bit of a double-edged sword, however. It’s immersive and full-bodied, filled with crackling branches, gargantuan thumps, stones clacking around, and far-off screams of the wounded and captured. However, is this kind of sound – complete with surround effects and the “supernatural rumble” so readily heard in films like Paranormal Activity when Toby comes out to play – capable of being captured with their equipment? 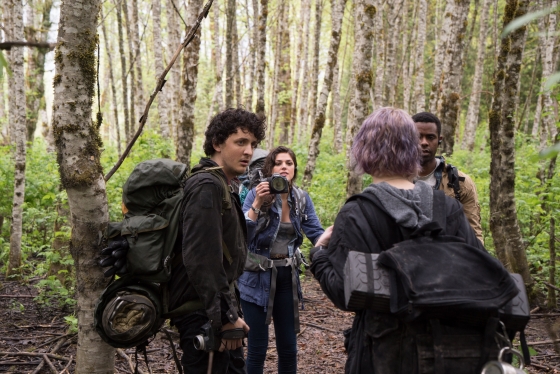 This was one of a few things which threatened to take me out of the movie, right alongside the film’s over reliance on the characters’ inability to simply approach the camera-holder by warning they’re coming up to them. These techniques are part of Blair Witch’s “BOO!” scares, but under the circumstances, a little “Heads-up, I’m heading your way!” instead of suddenly crashing into the camera would be a little more courteous, don’t you think? 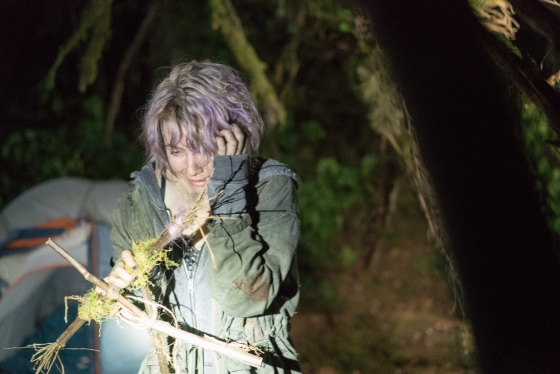 Something else setting this film apart from its predecessor: the violence and gore quotient has been upped, a direct response to the people for whom the suspense of the original wasn’t enough. The most common complaints about the original movie were heard from some saying it was boring because they never saw the Witch or anything happen to any of the characters. This seemed a complete lack of appreciation for what The Blair Witch Project was – a sheer avoidance of all of that, perversely turning open space into one of the most claustrophobic settings ever while exploring the human dynamic of three desperately lost people. 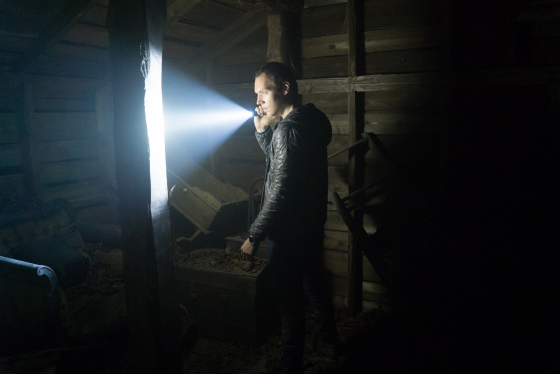 This time out, be prepared for more blood and some moments which will make you flat-out squirm. One death scene in particular happens so violently quickly, you’ll first wonder what you’re staring at, only to be repulsed by the realization of what actually happened. Wingard’s “less is more” sensibility plays very well during these moments, capturing only scant glimpses of frightening shapes in the woods and letting our minds and imaginations wreak the havoc he seeks. 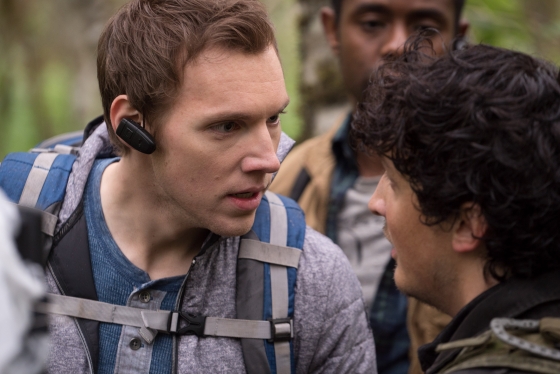 Blair Witch improves upon the techniques of the original and, in some instances, even surpasses its effectiveness. While the original relied on the actors selling the fright and terror of the woods and the danger, Blair Witch goes a step further and makes you realize how cunning and devious the Witch really is. She not only uses her supernatural powers, there’s an addition of the human element into her machinations. Once you’re in her woods, there’s no escaping and no telling what she’s got up her sleeve. 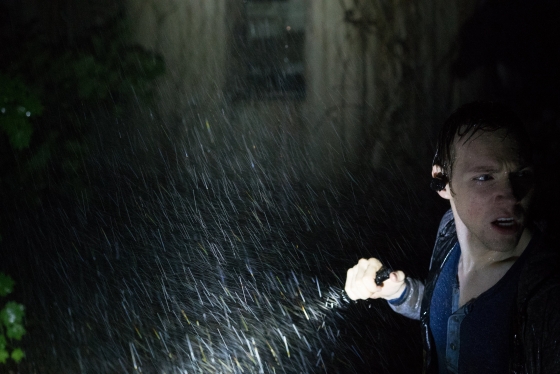 Its trickery will stay with you long after you leave the theater, prompting questions you may only receive answers to upon repeat viewings. The film toys with you and bats you around gently like a cat with a mouse for a little bit; once its fangs are bared, it’ll sink its teeth into you and not let you go, even after it shakes you around and renders you senseless.

Let’s put it in blunt terms: Blair Witch is one scary, nerve-wracking son of a bitch. The film pins us to our seats and dares us to let go of our armrests, which you'll be white-knuckling by the 20-minute mark.