Blake Griffin Ruins Basketball For Everyone Else, NBA Disbands 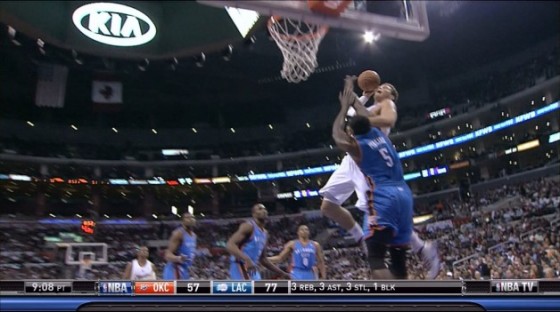 I will call Blake Griffin’s dunk over Kendrick Perkins the best one of the season, and no, I am not hasty in saying this. The only way this dunk can be topped is if Blake Griffin does this again on someone bigger than Perkins. Since Yao Ming and Zydrunas Ilgauskas retired, he can do it over Roy Hibbert. Otherwise, yes, this is the dunk of the year. Dunk after contact, LeBron, and then we’ll talk.

You can’t help but feel sorry for the guy on the receiving end of that dunk, too. Poor, poor Kendrick Perkins. It’s not enough that he looks perpetually sad. Griffin had to take him to a new degree of sadness. Scott Brooks should just give Perkins the next game off to do whatever he wants to cope.