Sports > Hockey > Blood on the Ice

Blood on the Ice 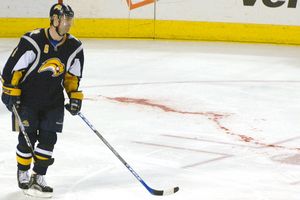 Many sports are violent, of this fact there is no denial. Professional wrestling? Well, though not, by the popular vernacular, a ‘sport’, is still pretty damn violent. Extreme Cage Fighting? Now that’s the epitome of purposeful brutality. Crap, even Football, that most structured of all sports where every single guy on the opposing team is out to literally smash your ass to the ground, is quite gruesome. Yet, when it comes to hockey, it has become almost a joke when the violence erupts during a game. Fights, despite the fact that they are fewer and further between than they used to be, are still as popular as ever. Now, even though this particular article isn’t all about fights and the blood they inevitably create, they do make an appearance. The other incidents are just plain unlucky happenstance, albeit just as viciously gory. I’ll warn you, some of these aren’t easy to watch.

The infamous moment occurring here features Clint Malarchuk. During a game on March 22, 1989, between the visiting Blues and Malarchuk’s Sabres, Steve Tuttle of the Blues and Uwe Krupp of the Sabres collided at the mouth of the goal with Tuttle’s skate catching Malarchuk on the neck, severing his carotid artery

On February 10, 2008, in a game between the Panthers and the Sabres, teammate Olli Jokinen, tripped over the leg of Sabres’ forward Clarke MacArthur and sliced Zedník’s external carotid artery with his right skate blade. Zedník immediately skated to the Florida bench, leaving a trail of blood on the ice.

On March 11, 2000, during a Leafs game against the Senators in Ottawa, the stick of Marian Hossa clipped Berard in the right eye, severely injuring it. The eye had been slit on sclera which often results a retinal tear and a detached retina. Despite being optimistic about his future in the league, he ended up receiving a $6.5 million settlement from his insurance company, what many considered to be a career-ending settlement.

On May 1, 2004, Steve Yzerman was hit in the eye by a deflected slapshot from the stick of fellow Wing, Matthieu Schneider in a playoff game against the Flames, breaking his orbital bone and scratching his cornea. He had eye surgery following the incident, and was sidelined for the rest of that post-season. The eye injury also forced Yzerman to miss the 2004 World Cup of Hockey.

On November 30th, 2006, Dallas center Mike Modano’s skate kicked up from the rear and sliced open the left side of Heward’s face from the bridge of his nose to the outside of the left eye. Heward went down immediately, then just as quickly rose and darted for the bench while the blood flowed freely from his face.

In the Bouchard/Jonathan fight, both men shed the gloves simultaneously, the strength of the big defenseman is evident as he yanks the bucking Jonathan up and down. It is Bouchard who gets off first: Bouchard’s first punch strikes Jonathan’s helmet; his second punch slides over the top of that helmet- and then he misses every other punch he manages to throw in this brief but furious bout. Those misses are caused by Jonathan’s boxer-like skill in juking to his left as he returns fire with his own right; Bouchard’s battering-ram rights all slide by the right side of Jonathan’s face. And then there’s the blood.

Vandy sees his opening and pounces. POW, he drills Kypreos with a single straight left, smack in the face. Kypreos is instantly rendered unconscious and falls right down, face-first: bloody. VandenBussche stops fighting immediately and goes directly to the penalty box.

A small mess starts behind the net. Chara is tangled up with Koci. They skate away from the crowd and drop the gloves. Chara gets a few good punches in, then he gets a nice right in that cuts Koci’s forehead and nose. The refs come in to stop the fight because Koci’s a bloody mess.