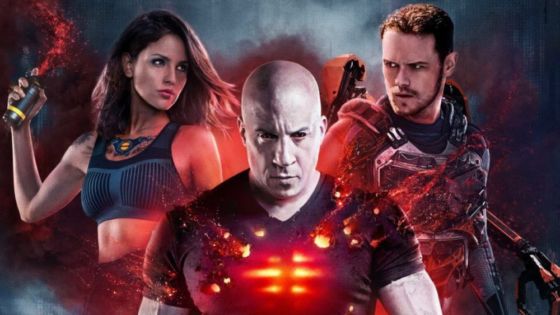 (Author’s note: I have not read the comic book series upon which this film is based. Now available on VOD.)

Vin Diesel makes a second mark in the filmed comic book adaptation genre with Bloodshot, a sci-fi action thriller which mixes beat-‘em-up knockabouts with the lighter side of Philip K. Dick. Although the film suffers from the amount of substance proffered being hopelessly overmatched by a glut of flash, it provides more than enough spectacle and humor to swing things back into some kind of balance. The film rides heavily on Diesel and his character’s newly-gifted nanite-driven superpowers, with the other characters nimbly stepping to open doors for him and facilitating his every move. 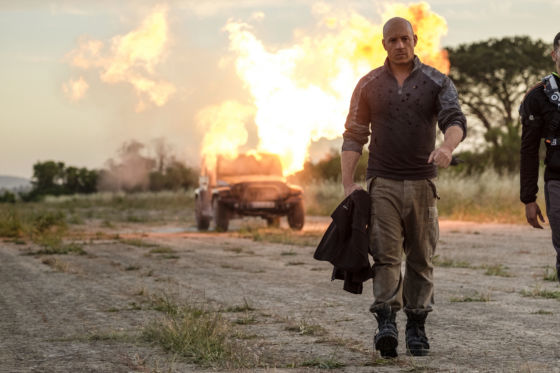 That’s what we’re here for, no? Letting any character played by Diesel off the chain is a massive multiplex draw, but there’s a spirit he brings which bears little resemblance to the heavies we’re used to seeing. He drives this film with more emotion than the cold stare and the basso tones of Dominic Toretto, filling him with fear and uncertainty… when, y’know, he’s not being manipulated into assassinations. This dichotomy helps Diesel pull off an unexpectedly nuanced performance as Ray Garrison, a deceased US Marine brought back to life through the magic of the modern cinematic chestnut, nanotechnology. 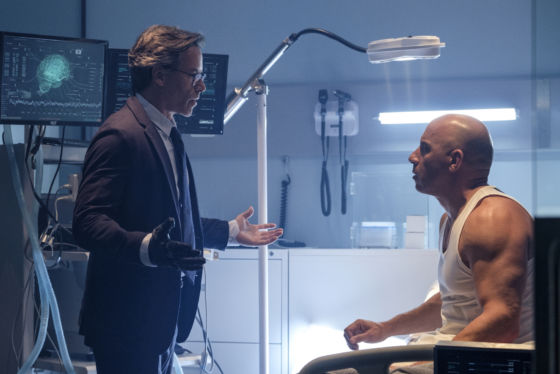 Garrison meets his unfortunate end in the prologue after being kidnapped and forced to watch love interest Gina (Talulah Riley) take a cattle gun to the temple before he receives a bullet in the head for his troubles. Rising Spirit Tech genius Dr. Emil Harting (Guy Pearce) resurrects him to prove the US military can reanimate their fallen using nanotech which comes with instant access to the computer/cell phone world, wildly unchecked strength, virtually guaranteed invulnerability, and the bonus of having the soldier’s self-identity wiped. Of course, Garrison remembers how to communicate and perform complex motor functions – especially situational weapons training and combat – but he can’t remember a damn thing about who he was or what he was doing to get him dead in the first place.

Harting’s already done the impossible by restoring breathing, walking, and eyesight to three other maimed soldiers in his stable; Garrison is his pièce de résistance, his masterstroke. But it doesn’t come without some glitches, as Garrison starts to remember his life before waking up in a laboratory. This is where Diesel flips the switch, fairly and believably going from confused and discombobulated to laser-focused and homicidal as Garrison straps up and sets off to find Martin Axe (Toby Kebbell), his and Gina’s killer. Funny how he – a walking pile of millions of dollars spent on R&D – easily drives out of RST headquarters, gets on a plane, pinpoints Axe’s exact location, and performs Mozambique Drills on Axe and his entire five-car security detail, eh? 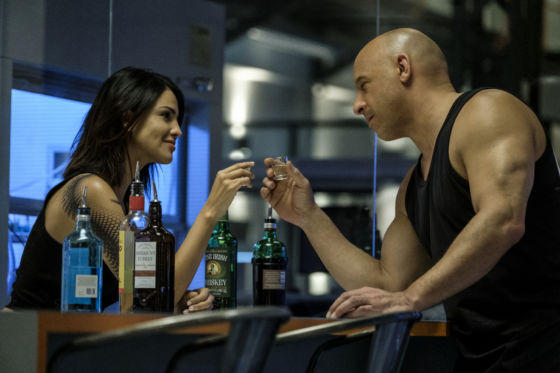 The aforementioned three soldiers – KT (Eiza González), Dalton (Sam Heughan), and Tibbs (Alex Hernandez) – conveniently pick Garrison up from his revenge mission, which is where things go sideways as we’re slammed into a sinister plot straight out of L.A. Confidential (coincidentally also starring Pearce). Director David S. F. Wilson has already given us quite a ride in the first act, making this first act worthy of another high-action film’s climax, and you wonder if he’ll have any gas in the tank to cross the finish line. Aside from the second act taking a slight break to allot more time to KT, the assassination scheme, and superhacker Wilfred Wigans (Lamorne Morris), Wilson is able to provide Jeff Wadlow and Eric Heisserer’s screenplay enough heft to engross us in watching Garrison being toyed with, with KT’s contempt of the situation opposed by Dalton’s sick pleasure. 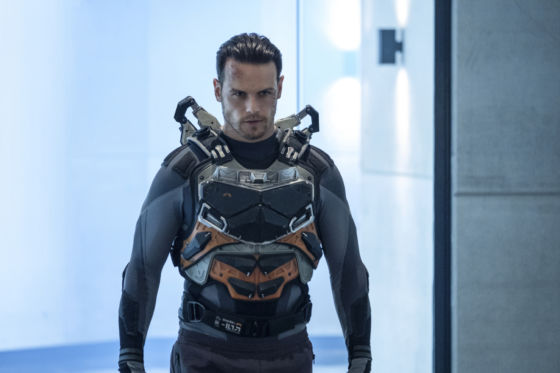 Wadlow and Heisserer draw on numerous familiar influences which grant this Diesel-powered vehicle an overdose of predictability. The script takes the Manchurian Candidate, Bourne-esque assassin digital with myriad possibilities. Like John Murdoch in Dark City, Garrison’s programmed to kill, rebooted after a job and incapable of knowing anything until Harting says “go.” Disillusioned co-conspirator KT seems like an old friend dropping in for a fireside chat, as do the basement-dwelling (forced, in this case) computer whiz with questionable people skills and the resentful accomplice. Not to be outdone, even Pearce finds himself playing a more dialed-down version of his other nanotech-championing character from another filmed comic book universe. (Not for nothin’, but Iron Man 3 is a damn fine movie. Don’t @ me.) 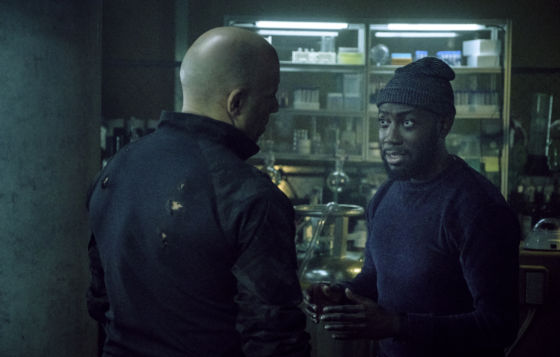 Bloodshot may be full of been-there-done-that, but its cast is eager and willing to have fun with it, especially Lamorne Morris. Known to most from the TV series “New Girl,” he is the spark the film needs to reach top gear when we’re introduced to his character midway through the second act before Garrison’s Groundhog Day button gets pushed again. Morris elevates Wigans by deftly bouncing and dancing through his lines with an improvised and fresh zeal, stealing the movie straight out from under Diesel, González, and Pearce by becoming the most magnetic and animated character of the pack. He also wields a natural-feeling British accent upon his auctioneer-speed delivery and one-liners like a skillful fencer, knowing precisely when and where to feint or strike. 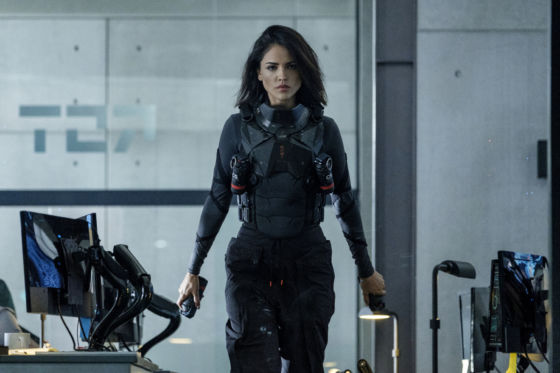 So, too, do we rely on Eiza González’s solid grounding as the weary KT, becoming the third strut upon which Bloodshot finds its stability. KT’s a hostage, tired of Harting’s machinations but beholden to him due to his control over her breathing apparatus, and González wears this with every RST-scripted line and movement KT has to perform. She endows KT with strength and smarts, and she also supplies this film the heart it needs to form a solid foundation alongside Diesel’s action and Morris’ humor. Another positive of this film is how KT is treated like one of the guys, not like an afterthought, romantic interest, or damsel in distress; she’s there to do the job, whether it’s acting the sympathetic inmate or engaging in brutal takedowns and melee assaults. 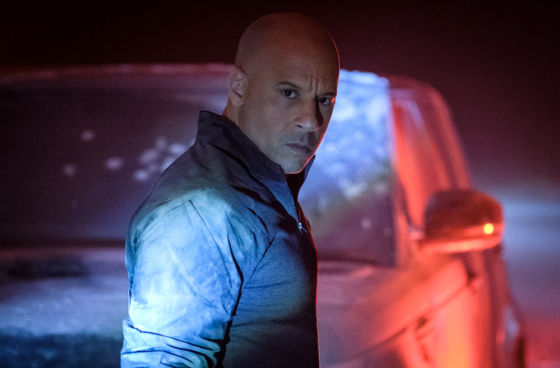 In an already-overpopulated milieu of superhero origin stories, Bloodshot is an entertaining entry into a potentially solid franchise with Diesel, González, and Morris at the helm. Even with its middling script, Wilson and the cast make the most of their efforts to distinguish themselves from the recognizable, with another nod going to Jacques Jouffret’s good-looking cinematography capturing quiet scenes and set-piece battles with a fluid and giving eye. When you go to a Vin Diesel film, you know what you paid to see, and Bloodshot delivers exactly that – a high-octane blast of popcorn cinema.

Bloodshot may be full of been-there-done-that, but it delivers exactly what it promises: a high-octane blast of popcorn cinema.