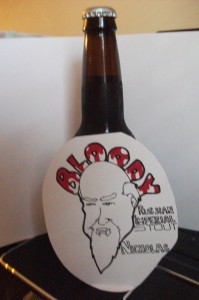 Information: What exactly is a Russian Imperial Stout? Let’s find out: ‘Imperial stout, also known as “Russian imperial stout” or “imperial Russian stout,” is a strong dark beer or stout in the style that was brewed in the 18th century by Thrale’s brewery in London, England for export to the court of Catherine II of Russia. In 1781 the brewery changed hands and the beer became known as Barclay Perkins Imperial Brown Stout. When the brewery was taken over by Courage the beer was renamed Courage Imperial Russian Stout. It has a high alcohol content – nine or ten percent abv is common. This higher alcoholic content was necessary to prevent the beer from freezing in transport, due to the colder temperatures in the Baltic.’

I am a huge stout fan. Anyone who has kept up with my reviews ought to know that. But I’m even more of a stout fan when I get to both name the beer and design the label. Yeah, it pays to know the brewer.

The pour is a deep ruby brown that borders on black. It is as dark as you please with a very light tan head that climbs from the initial pour like a frothy ivy. The released nose has immediate notes of black licorice and brown sugar. The complexities in the scent alone call forth to molasses, dark chocolate, and mocha. A very nice smell quite reminiscent of its family name

The first sip is alive with cocoa and espresso. It coats the tongue with a cloying chocolate and a nice caramelized sugar mouthfeel. There is a slight astringency at the finale, which is pretty common for stouts, but this particular sample isn’t nearly as such as some of commercial brands. There is also a bit of fruitiness that comes across as raspberries and even a hidden, but slightly self-aware bit of orange. For a stout that typically ends up chewy and heavy, this goes down surprisingly light with little of what makes a typical stout feel so weighty and filling. A great stout indeed. Pair this with fruit pie or barbecued ribs.

Rating: * * * *
An Imperial Stout worthy of its stolid moniker.