Gadgets > Games > Four Board Games That Will Ruin Any Party

Four Board Games That Will Ruin Any Party

Board games have become one of the last resorts for entertainment. In a world full of naked ladies, PlayStations and underground street-fighting circuits, it seems unlikely that anyone old enough to form an opinion that matters would want to bust out some dice and a clunky piece of cardboard. But someday you’re going to be at a social gathering when suddenly the power goes out. From the darkness the host appears like a phantom, holding candlesticks in one hand and Clue Jr. in the other.

If you ever find yourself in such a grim situation then you need to know the enemy. Which games are playable? Which ones lead only to tears? Compiling a comprehensive list of terrible board games would take at least three life times to complete. Instead, I present you with the Final Four of horrible board games. Each of these comes from the world of entertainment, but yet fail to entertain anyone who dares to play them. 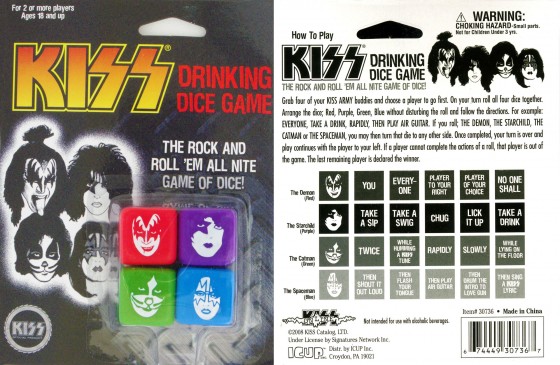 For the KISS fan who has everything, including irreversible liver damage. While drinking games are numerous, few combine the fun of alcohol with the rock n’ roll attitude of a man in cat make-up. The rules are simple: roll the dice and follow their instructions. And there’s the fatal flaw: outside of “TAKE A DRINK” and “TAKE A SWIG” the instructions are idiotic, if not down right dangerous.

Each die represents a member of the band and has its own instructions, like who drinks and how much. At least one side of the Gene Simmons die dictates that no one drinks, effectively wasting five seconds that could have been spent drinking with a bit more dignity. Peter Criss controls the speed of your inebriation but is also content with making you choke should you roll “WHILE LYING ON THE FLOOR” or “WHILE HUMMING A KISS TUNE.” Ace Frehley ends the dirty charade by giving you an action based on KISS: will you play air guitar, drum the intro to Love Gun or even “SHOUT IT OUT LOUD?” Only the dice will tell. When you’re done making an ass out of yourself the next player rolls the dice and the fun ensues again, presumably until everyone passes out or grows into their White Snake and Poison phase.

Fact: if you ever feel like you need KISS to tell you where, how fast and to what guitar solo you should drink to, you’re an alcoholic. 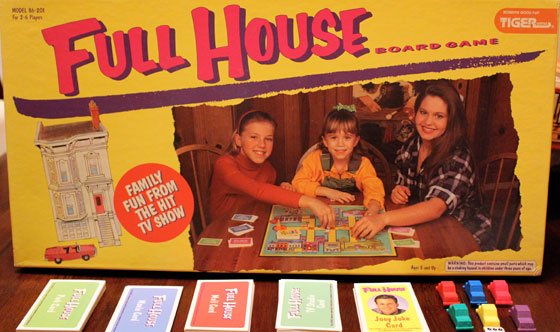 Anyone reading this should feel deeply ashamed for even thinking about Full House. Through some tragic twist of fate Full House rose to the ranks of pop-culture icon rather than falling off the face of the earth, ultimately bringing us the Full House board game in 1992. We must all carry the blame for this.

As a cash grab, board games are a commonly used option. As a board game, Full House is an abortion. Players drive around their neighborhood trying to collect all the members of the Tanner family into one car before returning home for a heart warming moment or earnest life lesson. This would be a perfectly sensible thing to do, ignoring that the person-to-seat belt ratio in that car is going to be, like, two-to-one. To seal the escape from your own personal Hell, certain squares along the board force you to read a Joey Joke Card. Armed with the handsome visage of Dave Coulier, these cards capture the essence of what is to be Uncle Joey by being physically painful to read in front of people you care about. According to popular urban legend, reading a Joey Joke Card backwards summons the Elder God Nodens, so look out for that. 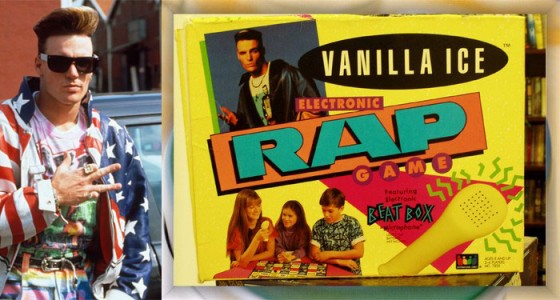 Someday mankind will be plunged into a global war. Brother will battle brother as love and peace are cast aside for bloodshed and violence. Then the bombs will drop and everyone, every single one of us, will be killed. Then, beings from another galaxy will visit the ruins of the once majestic Earth, find a copy of Ice by Ice and assume that everyone spoke in rhyme and wore obnoxious pants and sunglasses.

Ice’s career peaked with Ice Ice Baby and I’m pretty sure his manager knew it. What else could explain the existence of a Vanilla Ice board game? Much like M. C. Hammer, Ice made a terrifying leap into the world of electronic rap games. Even more like Hammer, Ice’s career has been flat-lining for the past sixteen or so years, perhaps explaining the lack of electronic rap games on your local K-Mart’s shelf.

The game is played by players completing rhymes around the board. After completing a set of rhymes, whoever played them must rap a set of lyrics based on them to the included beat-box microphone thing. Assuming you make it this far, this game play continues until someone completes the last rhyme on the board and raps the whole damn thing. If marketed towards adults this could have been an excellent drinking game, with each player downing a shot whenever they felt a creeping sense of regret. You win if you’re the last player to die of alcohol poisoning.

4) Dukes of Hazzard Board Game 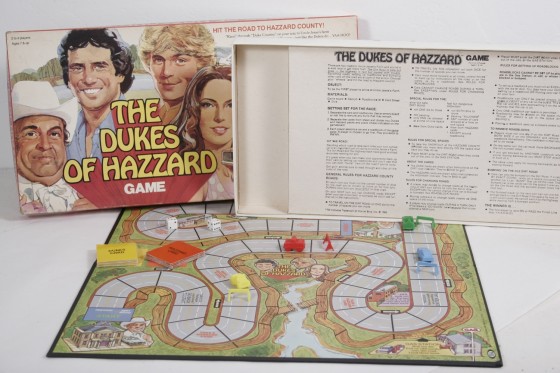 People are drawn to racing by the obvious danger it poses to participants and audiences alike. On a good day a race will end in a timely fashion. On a bad day Jeff Gordon is reduced to a pile of ash and parts of his car have taken the lives of several spectators. When you attend a NASCAR event you’re taking your life into your hands. Naturally, game designers have attempted to capture the speed and fiery crashed of racing and make it available in the safety of our homes. I don’t know who invented the concept of the racing board game but I can tell you that he or she should be punched right in the mouth.

Racing games play out the same way: you generate a number somehow and move that many spaces. Then, like all good racers, you stop moving and allow your opponent to do the same. This continues until one of the players realizes they’re wasting their lives, choosing to spend their precious time in the world of the living pushing oddly-shaped pieces of plastic around a board while making engine noises. No one wins. The Dukes of Hazzard breaks this down even further by providing the player with two tracks, one labeled “fast” and the other “slow.” The slower track supposedly provides less danger from road blocks, bear attacks and Boss Hogg, but this only further degenerates from the concept of reckless driving and law breaking that the series tried so hard to establish for years. If it weren’t for the lovely portrait of Sorrell Booke gracing the box art, the only redeeming factor this game would have is that the box isn’t filled with venomous cobras.