Bob’s Burger of the Day 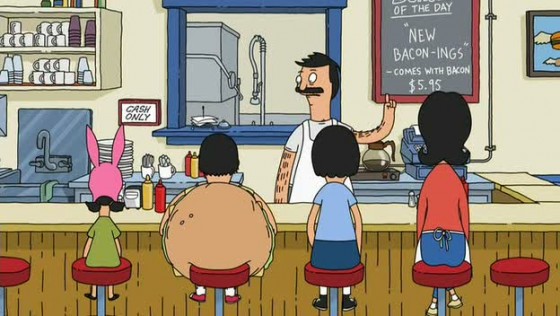 If you’ve seen an episode of Bob’s Burgers, than you are likely aware of the Burger of the Day. It’s like the chalkboard gag on The Simpsons, but actually funny. Almost every episode features at least one Burger of the Day, and Bob and Louise are the creative geniuses behind the punderful names. While Bob’s offerings are “family friendly”, Louise tends to sneak completely inappropriate names onto the chalkboard. It’s a fun little gag that is just ripe for super fans of the show to chronicle, and today we present two tumblr sites that do just that.

The first site is simply Bob’s Burger of the Day, where they present screenshots of the chalkboard, and keep a running archive of them for anyone like us who is searching for an image. The second site is The Bob’s Burger Experiment, where they are attempting to create a real-life version of each burger on the show. It’s a noble task indeed, and one that we wanted to highlight. We could think of no better way than to mash-up the work of these two tumblr sites in the photo gallery below. We definitely suggest you visit each site though for full details. They are both a delight for any Bob’s Burger fan.