Well, at least they’re honest. Miss Plastic is a competition held in Hungary celebrating the “unnatural beauties”. Ladies are encouraged to show off their breast implants, nose jobs, and other assorted work to promote the demonstrate the benefits of plastic surgery. I wonder if McNamara/Troy had a contestant entered? Somehow, I’m reminded of this Saturday Night Live All Drug Olympic sketch:

But if big fake boobs wasn’t enough for, tragedy struck the 2009 Miss Plastic competition. Alexandra Horváth, the pre-contest favorite, had a boob disaster when she tore a ligament after falling in her high heels. The accident was attributed to her silicone boob implants. Such a disappointment after passing the breast examination stage of the contest with flying colors. Onlookers had been admiring her bodywork when Horváth started to topple over. She had to be taken to a hospital by ambulance. The lack of balance was blamed on her “extra weight on top”, including new boobs and hair extensions. Apparently she had yet to get a booty implant to balance out her center of gravity. Now she has a otnr ligament in her foot. You can learn a bit more about the pageant by watching this video or going to their homepage:

Don’t feel to bad for Horváth. Despite the tumble, she still took second runner-up and a diamond jewelry worth approximately $10,800. Pageant winner Réka Urbán, a 22-year-old hostess, won an apartment in Budapest, while first runner-up Edina Kulcsár was given a new car. Appropriately, the winners’ plastic surgeons also received awards. 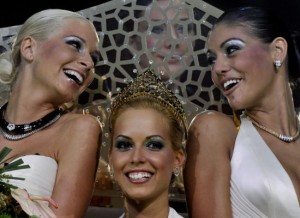