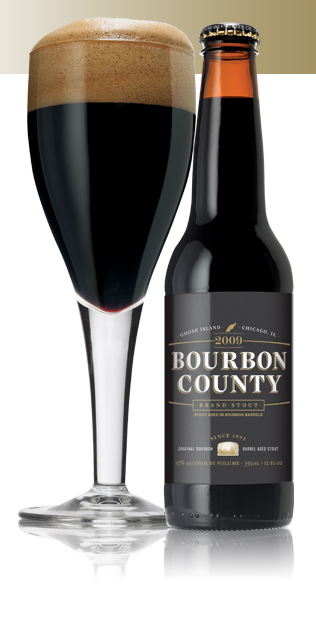 Information: Site- “Brewed in honor of the 1000th batch at our original Clybourn brewpub. A liquid as dark and dense as a black hole with thick foam the color of a bourbon barrel. The nose is an intense mix of charred oak, chocolate, vanilla, caramel and smoke. One sip has more flavor than your average case of beer. A great cigar beer.“

If sin had a color, it would be black. If sin had flavor, it would be this beer. Sin can be very, very nice. The byline up there absolutely says it all, but you’re gonna hear it again from me, because I’m drinking it.

At a slightly scary 25 bucks a four-pack, the new Bourbon County series from Goose Island absolutely solidifies the brewer’s place in the echelon of amazing beer makers. And at a respectable 13% APV, this is definitely not a chugging, white-trash six-pack that you chuck in a cooler for a family picnic. This is more akin to a personal experience; a small taste of something so enjoyable you’ll readily question if beer can achieve loftier heights. And maybe it can, but for now this is as close to beer Nirvana as I’ve gotten.

As I said, this beer is a shade of black reserved for magicians and dark arts, and that’s an appropriate an analogy as you’re likely to see, considering the contents. As soon as you pour, the rich, deep brown head leaps forth bathing your nose in oak notes and dark, bitter chocolate. And without the shadow of a doubt, you immediately know this has befriended a bourbon cask for quite the lovely relationship.

The first sip offers a barrage of flavors ranging from singed wood to rich caramels to bitter espresso. It’s as though someone added the effervescence and mystery of a dark stout to a glass of bourbon whiskey and called it a day. Typically this would turn me off since I am no fan of bourbon, never have been, but it doesn’t. All it seeks to do is inundate your mouth with a feel like nothing else. I’ve had other cask-aged brews, and they’ve all been great, but there’s just something to be said for a stout getting the treatment. And that all too familiar throat burn only serves to remind you just what you’re messing with, buddy.

A definite cigar beer to be sure, but if you’re looking for a food, I’d say a hearty stew or a slice of fudge cake. Possibly both.