How Bout Those Pittsburgh Pirates? 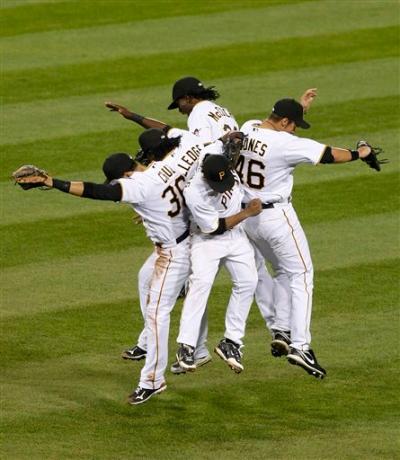 The Pirates have not made the playoffs since the ripe old year of 1992 and currently hold the record in American professional sports for the most consecutive losing seasons with a grand total of eighteen. This year was pegged to be another lost season but a funny thing happened on the way there, the Pirates have started winning.

Usually, the National League Central division is the dominant area of the St. Louis Cardinals and the Milwaukee Brewers, but if you check the standings, the Pirates are within sniffing distance of first place for the first time in nearly a decade halfway through the season.

How did this team bounce back? One reason has to be the emergence of outfielder Andrew McCutchen as a driving force and leader on this squad. McCutchen is batting nearly .300 and has driven in 48 runs this season. McCutchen’s speed and quickness show themselves on the base paths and in the outfield where his signature catches have the opportunity to make the highlight film every night. The offense is not just McCutchen; players like Neil Walker, Lyle Overbay and Garret Jones have driven in runs by the bunches this season and have used the friendly confines of PNC Park to their advantage.

However, let’s not forget about the pitching staff who have performed admirably this year. The pitching staff doesn’t have a lot of household names but the sum of their parts is pretty good. Starters like Kevin Correia, Jeff Karstens, James McDonald and Charlie Morton help the Pirates sport one of the lowest team ERA’s in the National League. When you need a pitcher to close out the game, you just call on, Joel Hanrahan who hasn’t blown a save all season.

We also have to give credit to the manager of this squad, former Colorado Rockies skipper Clint Hurdle who has managed this team’s pitching staff well and has this team playing above and beyond what they are capable of. Remember, he led a Rockies team that no one expected to a World Series. Could he work the same magic here?

For Pirates fans, this might be the first time in a long time that they are relevant within the NL pennant chase and to them I say, enjoy it while it lasts.