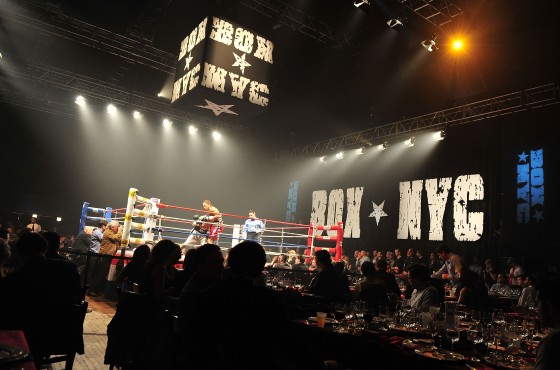 Hey Gunaxin readers. I usually start off my posts as I do love making sessions. With an apology for my absence and a second apology for what  I’m about to do to you. I really haven’t been writing the last two months because I actually started getting booked as a comedian as of February. You can keep up with me if you click the link to my twitter above. I’ll keep you in the know when I write something, do a show or post a video of some jokes.

For now, I’d like to talk about the awesome event that I attended for Gunaxin in New York City, BOX NYC presented by WCMG Events. This was only the third event I’ve ever covered as a “journalist” haha sorry I couldn’t call myself a journalist with a straight face. I was here to cover boxing, so that’s what a majority of this article will be about but I did get a chance to talk to some awesome people in the sports world.

So, I checked in earlier than everyone else and had no idea what to do with myself. The place looked beautiful. Mostly due to the staff of waitresses but the room looked good too. There was a bunch of sports swag there that included awesome memorabilia like Jack Dempsey autographed trunks and Mohammed Ali autographed boxing gloves in a silent auction. Both of which were a little out of this amateur comedian’s price range ($3,000 minimum bid for the gloves).

Finally Mike Gogel (of The Gunaxin Show and the Masters of None podcast) arrived and I had someone to talk to. I was tired of sitting in a corner and writing notes like I was Mark David Chapman. Eventually the celebrities started arriving. I’m talking A-Listers in their own mind like the cast of Jerseylicious. 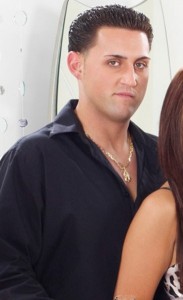 "Hey girl, you try that drink yet?"

Yeah. He was there. And his cougar mom was breathing down my neck like I was some sort of skirt steak. She literally came up to Mike and I and said “Okay members of the press, we’re ready for our pictures.” HA! Are you kidding me? I’m pretty sure she tried to eat my soul. They also had some fat Snooki lookalike and a John Gotti wannabe. I wouldn’t piss on their face if their hairsprayed head caught fire. 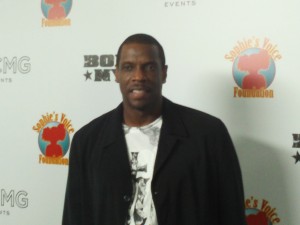 After that, there were some cool people there and we got to meet Darryl Strawberry, Doc Gooden, Anthony Mason and the legend John Starks. I call him a legend because as a Knicks fan…he punched Reggie Miller in the face. You don’t get more legendary than that. We should have some clips from those interviews coming up on future episodes of The Gunaxin Sports Show. There was an awesome moment where a lady came up to Doc Gooden and asked if he was famous, his name and why he was famous. He replied “My name is Darryl Strawberry and because I was good at baseball in the 80’s.”

Also, a semi-celebrity note was that Cipha Sounds from Hot97 was spinning/hosting the night. He was really cool to talk to and turns out he is from my home town. He puts together great comedy shows in NYC and it would be great to work with him.

So the fights were about to start and Mike needed some food in him before he sat down for the Poker Tournament, so we went to our table. Was it a coincidence that they sat us by a table full of smoking hot women? I doubt it. I’m sure everyone else got to pick their tables. The fights started and I didn’t have a fight card with everyone’s name yet, mostly because I was too stupid to look on our table next to the salad dish, but whatever. Fight 1 had White guy v. Black guy and it was a close fight. White guy ended up edging him in a decision. The second fight was cool and there was a TKO but nothing special except for John Starks screaming “DOWN GOES FRASIER!” after the fight. 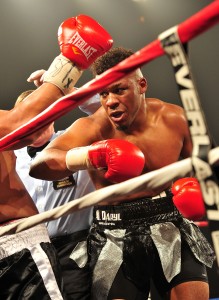 Miller goes in for the kill.

The third fight was where it was at. Heavyweights. The self proclaimed “Future heavyweight king of the world” Jarrell Miller against Isaac Villanueva. Now most of these fighters didn’t have more than 1 or 2 professional fights under their belts but these fighters were awesome: 250 lb dudes that just came to slug it out for a crowd. It was weird seeing a 250 lb intimidating black dude with a mohawk in dangly gladiator shorts but whatever. I wouldn’t make fun of him to his face. Villanueva had a great chin in this fight. Which means “Villanueva got his dick kicked in by Miller but didn’t fall down.”

Miller threw everything he had at Villanueva but as the fight progressed into the later rounds and they both got GASSED. These dudes need to hit the treadmill hard because if they want to progress their careers, they can’t be getting tired in the 4th round. However, how they performed in this fight was really solid. Especially Miller who ended up getting a referee stoppage for the TKO.

The next fight looked like they let some midget children step into the ring. 135 lb dudes that would probably beat the hell out of me. Deano Burrell was the first fighter that they promoted in the original email and he didn’t disappoint with a decision win. There was a nasty elbow in the fight and half the crowd yelled “WRONG SPORT!” which was awesome to see some MMA fans in the audience.  Burrell had a quick right cross and a hard left hand. George Santiago was his opponent and had a serious reach advantage but couldn’t do anything with it. Burrell kept him close and that was that.

Speaking of little guys who’d kick my ass, I got to speak with fighter/promoter Dmitriy Salita who fights at 5’9” around 140 lbs. and is a redheaded Orthodox Jew. He’s 35-1-1 and had an amateur record of 59-5. So yeah, he could kick my ass. He was one of the nicest, soft-spoken men I’ve ever met. Very cool to talk to and apparently he put together the whole card which turned out to be fantastic. So another thank you to Dmitriy who I wish well in his career but if I saw him at a bar hitting on my girlfriend I’d probably start a fight with him and before I could roll up my sleeves, I’d be bleeding on the ground with a concussion. Here is the interview that Mike captured on video :

Around this time they started bringing some comedians on stage. This was my only problem with the night. As a comic, I felt horrible for these dudes. I’m 90% sure that Cipha Sounds put these comics up to get his buddies a little stage time/money. I can totally respect that. But the problem I had with this was the fact that the crowd was NOT listening. Then when they did listen, they booed. I felt horrible for these dudes trying to do an act. The only one who did remotely well was Cipha who broke ethnicity down and made everyone cheer for their hometown and what not. These other dudes tried to tell jokes and it didn’t work. Sorry, fellas.

Back to the fights. The 5th fight was great. It had this hard hitting, unpolished Irish dude named Tommy Hardwick. I think if I remember correctly it was only his second fight and he did impress me. His mechanics need work but I would not be surprised to hear about this kid in a few years. He had 2 knockdowns and won when the referee said his opponent couldn’t go on after the second.

In the 6th fight I got tired of drinking wine and asked for a beer. I was surrounded by attractive women and didn’t want to look like a pansy. I mean even Anthony Mason was looking and he practically joined the convent! They told me they ran out of beer. So then Mason quit his side job as a priest and punched the waiter and magically they found me an Amstel*.

Moving on…Boyd Nelson who was the co-headliner and middleweight was VERY impressive in this fight. He had a big KO in the first round. Then a comedian came out and said that this fight wouldn’t be able to be topped. I guess if you’re looking for a knockout, then definitely not, but the headlining fight did not disappoint.

The headliners were Mike Ruiz vs. Martin Wright for the New York State Title in an 8 round fight. This fight was everything you want from headliners aside from a knockout. These guys gave it their all and fought all the way through 8 rounds. Ruiz came out strong and in my mind won the first 3 rounds. It was after that the strong reach and jab of Martin Wright took over winning a majority of the next 5 rounds in the judges minds. On my scorecard, I had Ruiz winning the close decision but Wright took 2 of 3 of the judges score card to earn himself the victory and the title belt. It was after the fight where Ruiz’s loudmouthed friend was yelling at Wright who was celebrating, when Wright said “I’ll fuck you up” and it was awesome to see Ruiz’s friend walk away like a girl.

So with the fights over and Mike out of the poker tournament, it was time to leave. The event was awesome. The food was great, the people were even better and I went back home to my humbling job at a power plant Friday morning. I’d like to personally thank Jonathan Schecter, Jed Weinstein, Dmitriy Salita and WCMG Events for the awesome night at Roseland Ballroom on behalf of Mike and the rest of Gunaxin. I really look forward to the 7th annual event!