It was kind of an off-weekend for Hollywood: nobody made quite what they were supposed to.  So the real winner this weekend is Michael Jackson, once again, with “This Is It” beating out even Cameron Diaz’s “Box” for attracting crowds: it’s at $186 million so far. 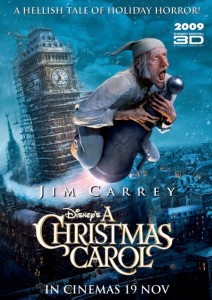 With “A Christmas Carol”, Disney learned the hard way that motion-capture, Jim Carrey and CGI equals a huge budget but not a huge box office to go with it: it won the weekend with $31 million…against a $180 million budget. Let’s just type that number out for you: $180,000,000.  So far, Disney has made approximately less than ten percent of that back, once the theaters take their cut.  It has to make $360 million worldwide to break even: chances of that happening are not good, but they did start the Christmas season a bit early.

Adding to the schadenfreude was the fact that this was 3D and therefore was supposed to make a fortune for the studios because you pay fifteen bucks to see the movie and wear dorky glasses.  Hey, Hollywood, maybe instead of remaking movies constantly in 3D…you could try making some good ones!