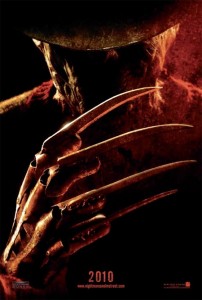 After a month in rehab, your box office columnist has returned…and immediately considered injecting heroin straight into his eyeballs again, as the Nightmare on Elm Street remake somehow grossed $32 million.  How To Train Your Dragon has also somehow clung to the number two spot, grossing $10 million while Jeffrey Katzenberg rants and raves about how Clash of the Titans is somehow ruining 3D.

In positive news for taste, Jennifer Lopez’s latest movie, about getting knocked up and THEN finding the ideal husband, somehow just isn’t doing that well. Maybe because the rest of America has finally learned to associate her name with the burning agony of venereal disease, or maybe it’s just that creepy skeleton she’s married to.  Either way, The Back-Up Plan is tanking.

Also tanking is Brendan Fraser’s Furry Vengeance, a movie we’ve discussed before, making only $6.5 million before Iron Man 2 shows up to kick all the asses.  Maybe Fraser will realize he’s a talented actor, not some hack, and start making good movies again.  Well, we can hope, anyway.