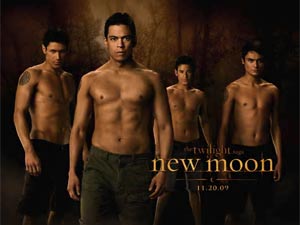 The real winner this week is “The Blind Side”, which came out of nowhere and broke its foot off in the weekend’s ass, going up 70% and making $57 million, crossing the $100 million mark with plenty more to go.

It also cockslapped “New Moon”, which tried its hardest to exploit Native American abs and budding teenage girl sexualities, but still dropped 50% over the five-day Thanksgiving weekend.  If you just look at the three-day weekend, it dropped 70%.  It might not cross $300 million at this rate.  Summit will just have to settle for the huge pile of money it’s already made.

Nobody really got their ass kicked this week, but “Ninja Assassin” opened the lowest of the new wide releases, even getting beaten by universally loathed suckfest “Old Dogs”.  Which is too bad, because it’s awesomely violent.  Seriously, your testicles demand you see this movie.  Now.