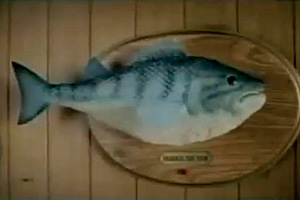 Last year, McDonald’s tortured us with perhaps the most annoying commercial of all time. For Lent, they not only put the filet-o-fish on sale, but made a commercial with a talking fish and a VERY F%$#ING ANNOYING SONG.

Well, guess what? It’s Lent again, and that commercial is back on. Apparently, the moron imbeciles who like it, and enjoy having it stuck in their head, were more loudly heard than those who want to smash their TV set every time it comes on.

I find myself diving for the remote control when that commercial comes on just as that awful fish starts with that song. Once I change the channel, the same friggin commercial is on the next station!

I swear, McDonald’s, I will physically assault the people responsible for this if I had any clue who they are. DIE YOU BASTARDS. ROT IN HELL! DIE! DIE!