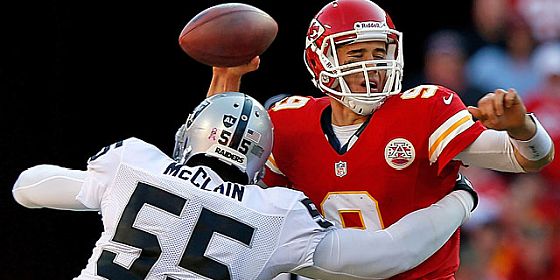 In a bit of news that shouldn’t shock anyone, the NFL’s new concussion policies still don’t work. Chiefs backup QB Brady Quinn admitted to reporters on Wednesday that he returned to the field during his team’s October 28th game with the Raiders after sustaining a head injury. This isn’t the first time that a player was allowed to return after taking a blow to the head. The Redskins received criticism earlier in the year for allowing Robert Griffin III and Jordan Pugh to return after being hit in the head and knocked woozy. This is after the controversy over Browns’ QB Colt McCoy being allowed to play with a concussion in 2011, and the NFL instituting new protocols to address head injuries.

The takeaway from this incident is that the NFL’s procedures to address concussions simply don’t work. Quinn admitted that he didn’t notify the coaching staff about his injury and memory loss because he didn’t want to be taken out of the game, and we’ve seen coaches blame players for not playing hurt already this season. The only solution, short of changing the rules of football, is to take the entire process out of the hands of team personnel. We have a few suggestions that we think could make a difference in this fight.

We love football, and realize that the medical concerns are the biggest threat to the long term health of the game. Anything, even drastic measures, that might address head injuries should be implemented immediately.