Sports > Football > Brandon Marshall, the Only Fire on the Dolphins?

Brandon Marshall, the Only Fire on the Dolphins? 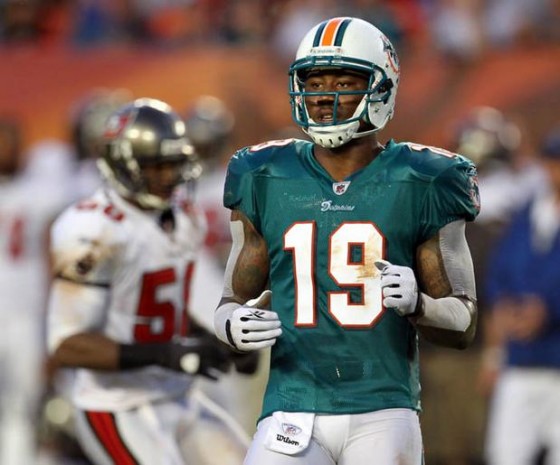 People are calling for Miami Dolphins WR Brandon Marshall to be disciplined (or institutionalized) after his vow to be kicked out of Monday night’s game against the New York Jets.

The two-time Pro Bowl selection added that he wants to play like a “monster.”

When asked if he’s kidding, Marshall said: “I’m not joking. I’m serious. They want to fine me, hit me with a $50,000 fine. I’m going to play. The quarter and a half I’m out there, I’m going to play like a monster. I might get into a fight with Bart Scott. [Antonio] Cromartie, we pretty much matured our relationship a little bit. We used to fight in Denver and San Diego. If that happens, it happens. We’ll see.”

This is somehow a bad thing that Marshall wants to play intensely. Even if he does actually follow through with this plan and start a fight with a Jets player, is that a bad thing? I’m sure tons of Internet commenters will call him a “thug” (such an easy word to throw around), but I seriously think he’s the only one on the team who’s fully invested in playing right now.

Think about it: the Dolphins have started 0-4. It’s 99% certain that they won’t make the playoffs with the competition in the rest of their division. You can’t help but think that there are already players mailing it in. Speaking of mailing it in, Reggie Bush was their main free agent acquisition. They’re already 0-2 at home this season, and they had an awful 1-7 record in their own stadium last season. Something needs to be done to show that team actually gives a shit.

Enter Marshall’s comments. Yes, it’s not something that says “we’ll make the playoffs,” but that’s because a statement like that would be delusional and generic. Saying you want to fight the other team actually makes your fans think you still care, in a stupid way. At least it makes Marshall more accessible because he’s just as pissed off as Miami fans that the team is sucking, and to vent he’s going to do it by whaling on Bart Scott. To me, that’s awesome.

Rex Ryan gets a lot of crap for talking a lot of crap. In the AFC East, every team hates each other with an immense passion. I’m not saying other divisions don’t have the same kind of hate, but in this one, it’s especially notable. Marshall’s comments now make fans eagerly look forward to Monday night, not seeing a game between two mediocre teams, but a potentially intense game with the rivalry subplot. It’ll be interesting what Marshall decides to do in the spotlight of Monday night.