When none of your team’s eleven players can score, at least you can rely on your ball boy to provide you with some fancy footwork. What amazes us is that neither the referee or the linesman sees the incident, which doesn’t exactly happen in the blink of an eye. This classic clip is from 2006: 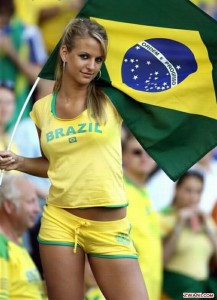 Not the Ref, but we can Dream

In fact, the referee awarded a goal, and was subsequently suspended:

A Brazilian referee faced suspension on Tuesday after she awarded a goal that television pictures showed was scored by a ball boy. The 89th minute goal allowed Santacruzense to snatch a 1-1 draw at home to Atletico Sorocaba in the Paulista Football Federation (FPF) Cup on Sunday, a regional tournament played in the state of Sao Paulo.