Five Pariahs of the Men’s Room 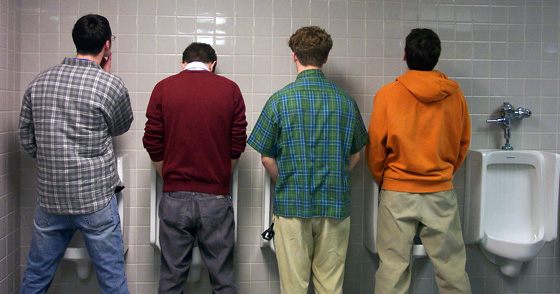 As a man, there are some rules that are simple, finite, and unquestionable. Many of us men work in an office building with public restrooms. As a result, we stumble upon men’s room faux pas on a weekly basis. They irritate us more and more every time. Some men don’t seem to understand these social constructs. We’re willing to bet that every man who reads this can relate to at least one of these. Most events occur at the urinal because apparently a lack of walls equals a lack of personal space. Don’t be one of these guys… 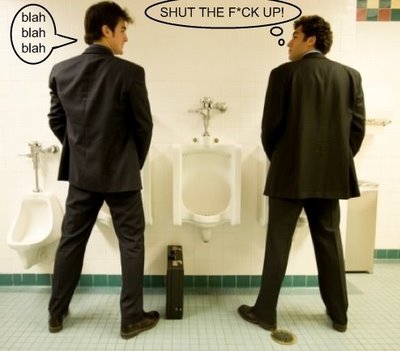 There is no reason to speak to another man within the confines of the men’s room. The sole exception is at the sinks. Even then, the conversation should be limited one or two words per person. We’re not women, don’t pretend to be one.

When at the urinal, you face straight ahead and nothing short of a nuclear attack should break your focus. You also cease all conversation. No one wants to talk to you when you have your dick in your hand. Most men have once walked into the men’s room with a co-worker (purely coincidental) and he tried to continue the conversation once inside. It is up to you to put an abrupt halt to that dialogue with a stern “DUDE!”. He might still not get it. He’s a moron. Also, speaking to a man in another stall should be punishable by law. Check your TP supply upon entering. No excuses. 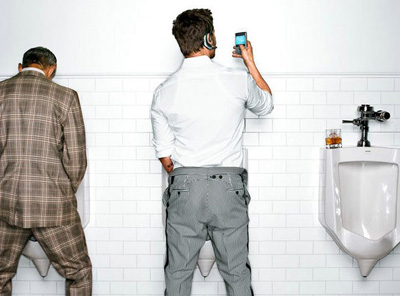 Expanding on the Chatty Kathy, it should go without saying that cell phone use is unacceptable as well. Nobody wants to hear you on your phone, regardless of whether you use a bluetooth headset or not. Let it go to voice mail, call the person back. You should only be in the bathroom for a few minutes, business can wait. Please don’t hold a conference call while another man is pinching a loaf. Ugh.

The exception, of course, is smartphone usage while sitting on the shitter. Keep the volume off, and then feel free to crush all the candy you’d like, as long as nobody else is waiting to use the pot. Lastly, even if you’re Brad Pitt, camera usage or selfies are strictly prohibited. Cmon man!

This guy is so damned irritating. He will stand at the urinal, both hands on his hips and taking a leak like it’s some kind of GD magic trick. Do yourself a favor, do the next person to use that urinal a favor, do the cleaning lady a favor, AIM YOUR SHIT! The puffed out chest that can accompany this pose is either a method of aiming or he’s just trying to show off. This guy is an ass. 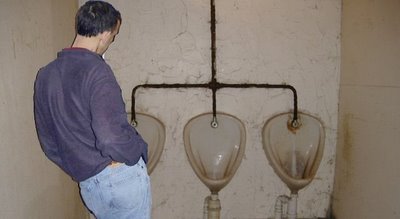 This special brand of jackass finds it necessary to turn the area into his own private lounge. He’ll usually sigh audibly to announce his presence, find a urinal next to the wall, and flop against said wall like a bear teetering on hibernation. He’ll take his leak at an angle, tempting fate and physics the entire time. Hey asshole, need a rest? Use the stall. 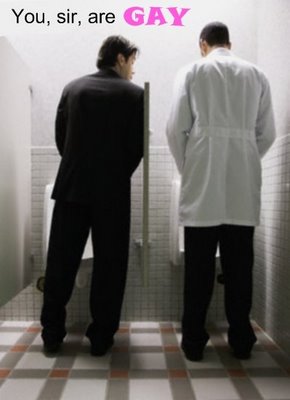 This closet case will peer over at your junk while standing next to you at Urinal Row. This guy is easy to pick out if there are dividers between the units (as God intended). It’s a bit more subtle a move if there are no dividers. This goes back to the original point, eyes straight ahead. Move your head to the side, you’re gay. Unless, of course, you are trying to search for a Miami Dolphins Super Bowl ring missing a gemstone. Even then you’ll probably end up making out with a dude. Lesson learned, Ace. Lesson learned.