Media > Movies > Break Out The Crayons! Let’s Color Some Spoilers!

Break Out The Crayons! Let’s Color Some Spoilers! 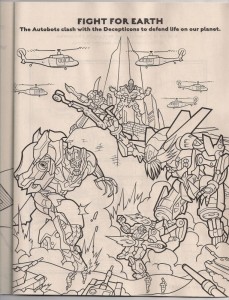 With the new, soon-to-be-blockbuster Transformers 2: Revenge of the Fallen due to hit theaters June 24th (that’s tomorrow, for you calendar-deficient kids out there), the store shelves have been inundated with toys, clothes, masks, guns, and, apparently, coloring books. Recently scanned pages by TFW2005 prove that no matter how staunchly Michael Bay and company attempt to swim around any potential leaking of plot (or lack thereof, evidently) or action, someone’s always gotta ruin it for everyone. Here are a few of the coloring book pages depicting major story points and even climactic scenes all in black-and-white ready for you to take marker in hand to. Generally, I don’t spend too much time wallowing over spoilers or write-ups from movie releases before they hit state side, but, for some odd reason, I chose to this time and I’m giving it all to you! So, not only did I first see the images on Worst Previews, but I also read a review from one of the more respected movie-goers, Massawyrm over at Aint It Cool News and he more or less rips it a new asshole. So, all that being said, I still have intentions of catching it at 12:01 tomorrow morning. What can I say, spoilers or no, it’s hard to pass up Michael Bay and butt-whooping robots. We’ll see.