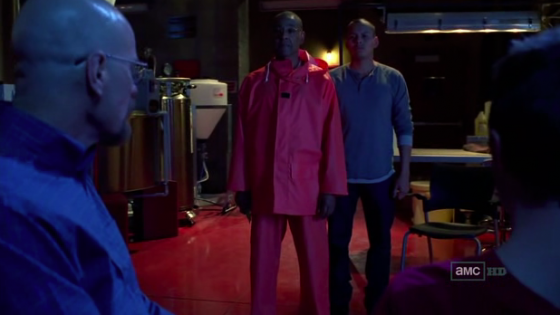 “When you make it Gale versus me or Gale versus Jesse, Gale loses. Simple as that.” -Walter White

After being on hiatus for nearly 400 days, Breaking Bad is finally back on the air! It’s good have the gang back together again. It had been far too long since we last saw Walter, Jesse, Mike, Gus, Skyler, Hank and Marie. Season three ended on such a high note there was a bit of doubt that the beginning of season four could sustain the momentum the show had gained. The premiere episode, “Box Cutter,” erased those fears. The series is in top form and doesn’t look like it’s showing any signs of slowing down.

***As a note, we are under the impression that by reading a “recap” you are acknowledging that you’ve either seen the episode or are okay with spoilers. Spoilers will not be shied away from.***

Season three ended with Jesse firing a shot in the direction of Gus’s chosen chemist, Gale. There was some question that maybe Jesse had changed the angle of his shot at the last minute and didn’t actually shoot him, so it was a nice touch the episode began with Gale setting up the super lab that Walter eventually takes over. Listening to Gale talk Gus into finding and hiring the guy who created the pure blue meth was kind of heartbreaking because it was as if we were watching a good-natured man beg and plead his way into an early grave.

Then we jump back to the present where the episode simplifies. How will Jesse and Walter weasel their way back into the meth game? They played their card; they shot Gale thinking that Gus would have to keep them on because there’s no one to produce product. They went all in and now they wait. And that’s precisely what we as an audience do. We wait. And wait.

But waiting is never boring on Breaking Bad. Every second we’re forced to wait is a second filled with tension and drama. Every second life hangs in the balance. At any moment something terrible and horrible can happen and frequently does. So as we sit in the super lab with Walter, Jesse, Mike and Victor waiting for Gus to show up, we’re on the edge of our seats. 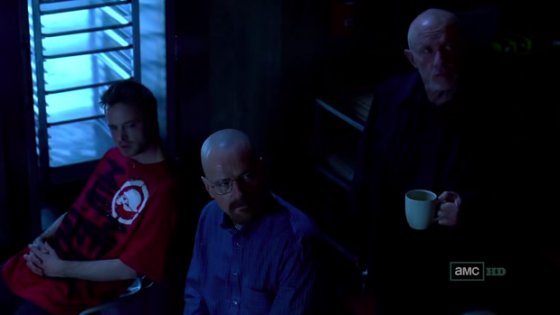 Meanwhile, Skyler is out in the real world beginning her own cycle of “breaking bad.” She’s trying to get more information about Walter and wants to break into his house to get info. She uses her own baby to bait the locksmith into opening Walter’s house. She doesn’t find anything except the doll’s eye, but what’s important is that we start to see her break the law in order to get what she wants. She is going to be a part of the meth operation. It’s only a matter of time.

Then we cut to Hank and Marie. Hank is essentially paralyzed from the waist down and boy is he surly. He used to be the most cocky and arrogant DEA agent in all of New Mexico, but now he can’t even take a crap without having his wife there to put a bedpan underneath him. Hank has been humbled, so that means when he starts to finally get up and get going, he is going to go after the people that did this to him with every ounce of his energy. That is, unless he’s too distracted with his new found love of mineral collecting.

Back to the super lab, we’re still waiting for Gus, and Walter is as smug as ever thinking they need him to get the product out. (It’s worth noting that we still haven’t heard one word from Jesse yet.) It’s almost 9AM and they need to start cooking or else the shipment will be late. Walter assumes he’ll be able to step right into work, but Gus’s trusted worker, Victor, steps up and starts cooking a fresh batch of meth much to the dismay of Walt and Jesse. If Victor can cook, what does Gus need either of them for?

Then Gus shows up and everybody stops. From the moment Gus enters, Breaking Bad is at its finest. Gus strides in and begins to get undressed. Walter is spouting off reason after reason as to why Gus should keep he and Jesse alive. He demands and yells, essentially begging for his life, but Gus calmly and deliberately continues to undress and put on a HazMat suit, in a scene that lasts two or three minutes; it was so ritualistic, it was haunting.

After Gus gets dressed,he begins to look around the lab for something. Walter is still begging, but Gus pays him no mind. He finally finds what he’s looking for: the box cutter. The same box cutter Gale used to open the boxes that all of the super lab materials came in. At this point, we know that Gus is about to inflict some damage, but to what? To who? Surely he won’t kill Jesse or Walt, so that just leaves Mike or Victor and we’re pretty sure that Mike wouldn’t let Gus take him down, so we know that Gus is about to harm Victor, yet we are still filled with tension. This is what the show does so brilliantly. The outcome was obvious and yet they still had us captivated. 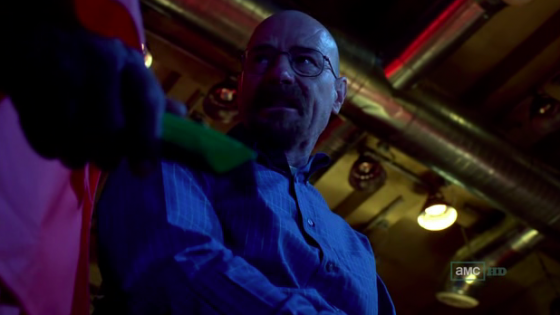 I don’t know how Breaking Bad got away with what they did on cable TV, but Gus slits Victor’s throat with the box cutter and holds him up till he bleeds out. The throat cut wasn’t a typical slash; there was resistance on the blade and it only made a hole in the right side of his neck. It was a horrifying image, but more horrifying was watching Gus hold him up forcing Jesse, Walt and Mike to look at what he was capable of. The most haunting thing was that none of this looked like it bothered Gus in the least. He showed those guys who’s in charge. Their play worked, but they should know he has a trump card.

Gus then proceeds, with the same deliberation and nuance as before, to get dressed in his street clothes. With attention to detail, he washes his hands and face. He cleans and dries his glasses. He reties his tie and laces up his shoes. All of this happens while Victor is on the ground bleeding out and the three men are left stunned and silence. Gus is almost out of the lab when he utters, “Well? Get back to work.” Gus is a bad, bad man. Walter may think he’s bad, but he will never be as heartless or cold as Gus.

Walter, Jesse and Mike are left to dispose of the body and mess. They begin to decompose the body in the same way they got rid of the first person they killed in season one. This time with much more success. After they get everything cleaned up, they go and eat at Denny’s.

It’s here that we finally hear Aaron Paul say his first lines of dialogue. Walter asks him how he’s doing and Jesse doesn’t seemed to be phased by the day’s events at all. Remember, Jesse killed Gale in cold blood and then watched another man bleed out in front of him. But yet, here he sits, eating a huge meal and shrugging it all off. He tells Walt that he understands Gus’s message. “If I can’t kill you, you’ll sure as shit wish you were dead.” Jesse appears to be hardened and callous. This will make for an excellent dynamic going forward. If Jesse isn’t afraid of death anymore, just how far will he push everything?