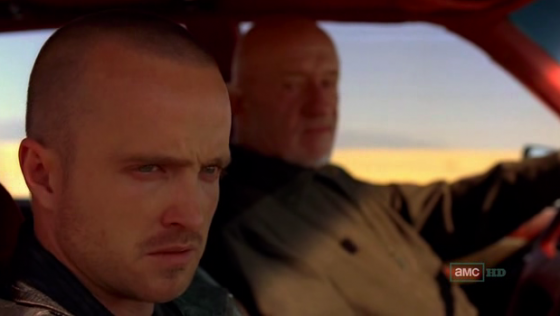 The largest “issue” with this episode was the structure. Jesse didn’t show up until about halfway through the episode and he ended up being the most important part of the plot. Normally this would be okay if there was something of substance leading up to his appearance. Instead, it was a very lengthy and rather boring conversation between Skyler and Walt rehearsing the talking points they’re going to reveal to Hank about Walt’s “gambling.” I know the series goes out of its way to be detail oriented, but that was just a bit ridiculous.

The other issue I have is lack of danger. I never really felt the suspense I was supposed to feel. This was true of two specific instances: 1) I don’t think Hank is suspecting Walt in any way and, 2) I don’t believe that Mike is taking Jesse away for him to be killed.

The Hank and Walt situation is one that I’ve been expecting. Walt is going to surface at some point and Hank is going to be there. Perhaps there will be a showdown at some point this season, but it won’t be during the fourth episode. The seeds of doubt about Walt have been planted in Hank’s mind though. If Walt is capable of hiding a gambling habit that allowed him to buy an entire car wash, what else is he hiding? Walt is also too open with questions about specifics with Hank. I didn’t feel suspense or danger in this episode because I want Hank to start suspecting Walt; I feel it’s where the series has to go.

And with Jesse, I just don’t think they’d kill off the best part of the show. Jesse is essential to the success of the show. What it does is acknowledge that there is a problem. Jesse is a problem. He is becoming careless and in an operation like Gus’s, this is a big problem. Walt sort of lays it all out to Saul when he says he knows he’s on borrowed time. Jesse is more than likely going to rehab or to be “scared straight.” However, until there’s another chemist, I just don’t think Gus can function without Walt.

How awesome was it watching Walt look right at Gale singing to him? That was a pure moment of horror for Walt and yet it was hilarious for everyone else. The show has always been a dark comedy, but these moments of levity have been scarce of late.

The cold open with Mike in the refrigerated truck was so badass. In an episode where everyone is starting to display weakness and break down, Mike rises up and shows why he’s the professional. The scene had no context, but it didn’t matter. Mike was almost annoyed at the whole situation, which made him more impressive. His life was on the line, but it was just a bad day at the office for him.

The season can go any number of directions at this point, but if I had to guess I’d have to say that Walt starts biting off more than he can chew without Jesse in the mix. Maybe he takes on a another partner and that partner starts being groomed to take over. Clearly Hank is going to be hot on his trail at some point. There’s got to be some sort of confrontation between two major parties at some point this season, but who?