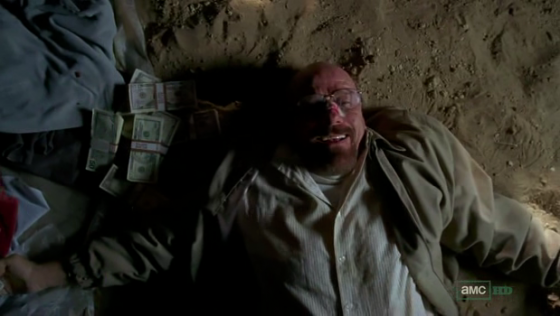 “When did wrong suddenly become a problem for you?” -Skyler

Hey! Rest of TV. You can give up. Breaking Bad is on a whole different level right now. Scott Winant, the episode’s director, needs to take a bow. The final five minutes were some of the most tense minutes of the year. The acting was top-notch. People thought Bryan Cranston’s Emmy episode was last week, but after his hysterical crying/laughing in the crawl space, I get the sense that this may be his new submission.

Walter White has been a path bound for destruction led by his hubris for a long while now. He always thought he had something that was irreplaceable: his ability to cook meth better than anyone else. Now that Jesse can cook his recipe, Walt isn’t valuable anymore. He’s spent the past year of his life ruining all of his relationships. If he looks over his shoulder, all of the bridges are now ash.

He’s isolated himself from everyone. He’s ruined his partnership with Jesse by constantly belittling and undervaluing him. His relationship with Hank and the constant threatening of Gus has caused him to lose his job — a job, mind you, if he loses will result in his death. His marriage is a shell of what it used to be, and his son thinks he hasn’t been real the past year. Walter does not have much going for him. Which explains why there’s only one thing left to do and that’s laugh.

There were two pivotal scenes I thought were done so differently, but were extremely effective. The first is when Walter is brought out to the middle of nowhere and fired. Much of his dialogue was done in a wide shot of the landscape so we can see all of the people at work. It’s still, allowing us to focus on the words — amazing words. Walter is so stupid that when Gus told him to never come back he replied, “Or else what?” Or else what? Does he forget what Gus did to Victor the box cutter? Jesse said he won’t cook if Mr. White is killed. Gus thinks Jesse will come around. I think Gus has a way with people. 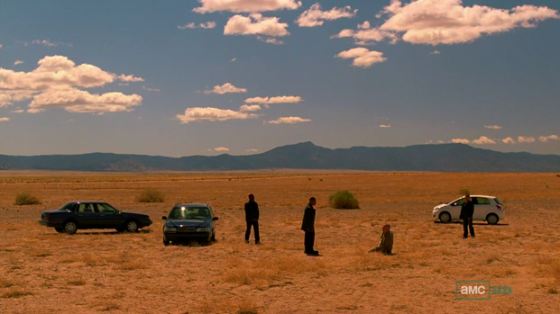 However, that’s not where the scene ends. Gus reminds Walt that he was supposed to take care of Hank and failed. Now it’s in Gus’s hands. If you forgot how evil Gus is, don’t. He told Walt if he tries to interfere with his killing of Hank he’s going to kill his wife, his son and infant daughter. Couple that with his gloating to Hector that he killed everyone he’s ever loved and that his family name is dead and we remember just how bad of a man Gus is. Needless to say, Walt is in some serious trouble.

Walt wanted to start a new life with his family and was going to use all of the money in the crawl space to pay for the out. But guess what? Skyler already blew the money on the now dead Ted Beneke. She was so busy playing criminal that she never consulted Walt about giving away $600,000 to the man who broke up their marriage. The good news is is that Ted’s gone and the IRS will be off their back. The really bad news is that there’s not enough money to make the family disappear. This led to the second great scene of the episode — one of the best scenes I’ve seen this year.

The first scene I talked about was simple. This scene was almost the exact opposite. It appealed to all our senses and was visceral. The first thing that Scott Winant did was use a heartbeat sound effect. Then they overlaid the phone ringing and Marie’s voice on the answering machine. Walt’s hysteria was added then Skyler’s voice. The final scene was like a symphony building to a crescendo. The more sounds, the more feeling, until we’re left with the haunting image of what Walt might look like in a grave. So beautifully done.

I don’t have any idea how Walt gets himself out of this mess. But rest assured, some people are going to die. The show has been picked up for 16 more episodes, so there’s still time for him to make a move but who does he eliminate on the way out the door? Do Jesse, Gus, Mike and Hank all survive? I have to think not. I’m so excited for the final two episodes, it’s ridiculous.