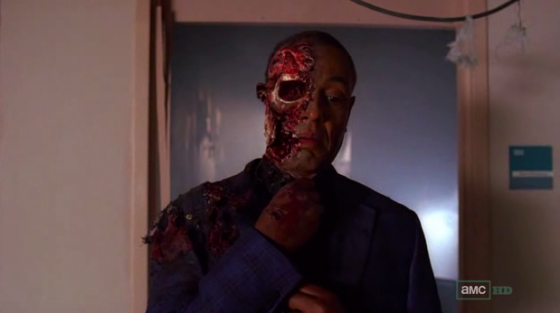 The episode is called "Face Off." Get it?

So the finale we’ve all been waiting for finally arrived and it brought about a lot of discussion. Many people loved the finale. They thought it had lots of suspense and payoff. The twist at the end left a lot of people gobsmacked. I, on the other hand, felt the finale was a bit weak. It all felt too easy. There was never any risk or danger. Make no mistake, I liked the finale, but I didn’t love it. Breaking Bad is still one of the finest shows on TV, but I never got that “oh my God” feeling.

Let’s start with the big event: Gus gets his face blown off as a result of a plan set in motion by Walter. I’m saddened by the fact that we won’t get to see Giancarlo Esposito’s great performance any longer, but the arc of this season was always intended to be Walt’s complete transformation into Heisenberg. He is the baddest guy in the meth game, now. He is the Scarface of the ABQ. How great (albeit ridiculous) a moment was it when Gus comes out and fixes his tie just before he collapses due to the whole missing half of a face thing? It was nice homage to The Bridge on the River Kwai when Alec Guinness dusts off his hat right before he dies. Remember, Hector was watching that movie when Gus came to visit him last.

It all makes sense now why they made Gus so unlikable when he last came to visit Hector. We as the viewer had to believe Hector would choose to help Walt and destroy his most hated enemy in Gus. It was pretty funny when Hector was called into the DEA and spelled out “Suck my” and “Fuc.” All darkly comical in a pretty tense episode.

But the whole plan unhatched so perfectly that it all seemed a bit too unbelievable. Walt freely enters and exits a nursing home. He’s able to communicate with Hector perfectly. Tyrus, for some bizarre reason, decides to not peek out the open window. Gus has his only moment of weakness and lets his hubris get the best of him. Walt goes back and retrieves the bomb without anyone noticing. I know I need to step back and just suspend my disbelief and allow a show to take certain liberties, but Breaking Bad is thought to be a cut above the rest because it doesn’t have to cheat. Some of this felt like a cheat.

But maybe the point of all this isn’t necessarily”What happens to Gus?” Instead, the question that needs to be asked is “What’s happening to Walter White?” Gus’s death was a means to an end. Walt’s transformation to Heisenberg is now complete. He’s killed before and killing Gus wasn’t what made him finally break all the way bad; it was the poisoning of an innocent child that was close to his only “friend” in the whole world that does it. That’s a new low and will probably lead to a lot of crazy events in the final season.

The smug way in which he told Skyler “I won” takes on a whole new meaning after it’s revealed he did in fact poison Brock, and lied to Jesse’s face about it. Gus had to go, of course. But even after Brock pulls through Jesse is still a bit remorseful about taking Gus down. Walt has now made someone complicit in his sick game. When Walt was spinning the gun in the penultimate episode it landed on the Lily of the Valley. No one knew what that meant at the time, but it’s cool to go back and see it now.

Walt has always been a prideful character and this is the final step in him turning evil. I do believe it’s well within his character to poison Brock. He’s selfish and will stop at nothing to prove he is the smartest man in the room. I don’t believe this is the last we’ve seen of Jesse and Walt cooking. Mike is still alive in Mexico with a lot of other Gus employees. Killing Gus does not mean the end of Gus’s enterprise.

Was anyone a little saddened that Hank was almost a non factor in all of this? It seemed like we were being set up to have Hank either find out about Walt or at least have him start to get on the case. He wasn’t even put in any danger. In fact no one in Walt’s family was in any danger. The lack of danger took a little bit away.

I know people are going to read this and think I didn’t like the episode. That’s not the case. I think it was a well-directed and acted episode. It had the feeling of a series finale. Season five was no guarantee when they wrapped production on season four. If this was how the series ended I would have been satisfied. I was on the edge of my seat the entire episode, but I never fell out of it from shock. This was a good episode to cap off a great season.