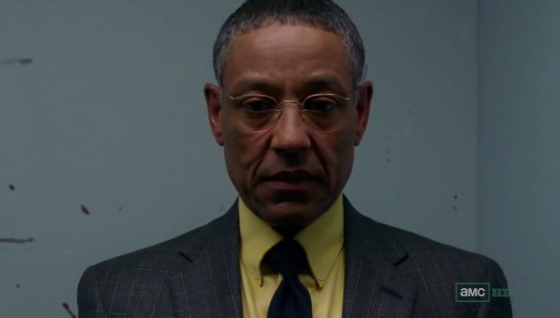 “Never give up control. Live life on your own terms.” -Walter White

Breaking Bad is doing something extremely interesting this season. Before this season the story largely belonged to Walter White. Everything sort of revolved around him. How did he impact the narrative? What effects did his actions have on others in the story? This season, the story has become the star and acts independent of Walt.

We’ve had episodes that have revolved around a bunch of minor characters from Marie to Hank to Jesse to Skyler to Mike and, of course, to Walter. But up until this episode, one guy vital to the proceedings had remained largely a mystery. Now no longer.

Vince Gilligan stand up and take a bow for this wonderfully developed Gus Fring-centric episode. We didn’t even know we wanted Gus’s whole backstory until we actually watched it. The episode was nothing groundbreaking. Many dramas will take a brief sojourn into a supporting character’s life and give us all their roots. (The Richard Alpert episode in the last season of LOST comes to mind.) But rarely does it blend so well with the ongoing narrative.

The point of this installments is simple: the noose is starting to tighten around everybody’s neck now that Hank is back working the case. Gus is a suspect to no one in the local law enforcement other than Hank. The catch, obviously, is that Hank likes to include Walter in his dealings. Naturally this creates a conflict of interest for Walter. A big one. A life and death one. The scene in the car where Hank is asking Walter to do him the favor of placing the GPS on Gus’s car with Mike casually “reading the paper” in the car next to his was wrought with tension. It was truly great.

Walter has been dead set that “he is the one who knocks.” Walter really thinks he’s the one running the show. But as the show points out, only one year has passed since season one and Walter is still an infant in the meth game. The man who’s really in charge? The man who’s put in the work? Gus Fring.

We saw how he rose through the ranks. He started giving away pure meth to customers at his chicken chain under the Mexican cartel’s nose. They did not take kindly to that. In an excellent flashback scene we see Hector — the wheelchair bound man who rings the bell — shoot Gus’s partner (perhaps in more ways than one) in cold blood. It now seems like Gus’s mission in life is to make Hector suffer and take down the cartel.

In just a short phone conversation with Mike, we sort of get a glimpse into the rest of the season. In short, Mike tells Gus that if it’s just the cartel, they can handle it. But if Hank is really on to them, it could be the perfect storm. Get ready for the perfect storm.