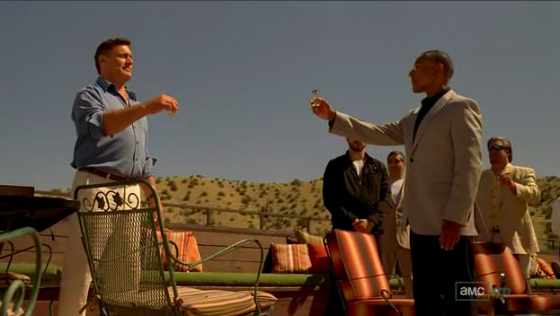 “I promise you this: either we’re all going home or none of us are. Now settle down.” -Mike

As season  four of Breaking Bad heads into its final stretch, the show is not becoming more complex, it’s actually becoming wonderfully simple. Too often a show of this caliber gets so overwrought with frivolous storylines and complicated narratives that it becomes more about figuring out what it all means rather than just enjoying what is.

The latest episode was perfectly enjoyable while maintaining simplicity. Heck it was even predictable, yet even though we knew how the final scene was going to play out, it was still incredibly suspenseful.

Let’s start with Bryan Cranston. It seems fitting that on Emmy night where everyone was cheering for Kyle Chandler to get his first win for playing Coach Taylor on Friday Night Lights, Cranston was giving what could easily be an Emmy-winning performance. Cranston has been nominated for the award three times and won it each time. This brief  hiatus from the Emmys allowed someone else to win. Next year? Good luck beating Cranston.

The scene where Walter Junior shows up and Walt breaks down was beautifully moving. I don’t know that kind of pain, but I felt every bit of anguish he was feeling. That’s his 16-year-old son he’s weeping in front of. He’s in his underwear, having just had the shit kicked out of him by his partner who had just stuck up for him to Gus. He admitted he made a mistake. Walter Junior thinks he’s talking about gambling, but it’s so much more than that. His life is in jeopardy and he’s trying for once to reconnect with his son and preserve whatever relationship is left. 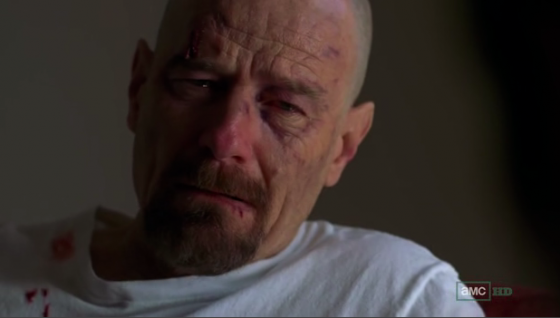 As great as that scene was, they went back to the well a second time for a much longer and more thought out speech by Walt to his son. I didn’t find this one to be as genuine, but I don’t think I was supposed to. It was a long-winded apology, but the real point of the scene was for Walter Junior’s closing line, “At least last night you were, you were real. You know?” It’s a big slap-in-the-face-wake-up-call for Walt. Why is he doing this? For his family, but now his pride has caused him to put himself on the top. And we all know that pride comes before the fall.

There are two other simple stories at work here that have significant ramifications. The first is that Skyler has made a large blunder in giving Ted Beneke over $600,000 dollars to keep him out of jail. It’s not because she feels sorry for him, but because her name is on the documents and the IRS will look into her. She really didn’t think long enough about joining in the gangster line of work.

Ted is a broken man who is used to having luxuries. Of course he spent the money on a new car and getting his business back up! Saul Goodman knew it was a bad idea. He even gave Ted the best nickname I’ve heard in a long time, “Johnny Fabulous.” Then Skyler, in all her White family prideful glory, had to tell Ted it was she who gave him the money. Surely Ted won’t let that rest. This is his life too. Now he’s using meth money to get his business going? He won’t be too happy about that. 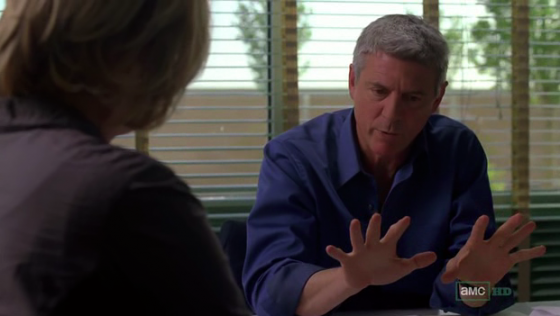 The last big thing that happened is that Gus has killed the cartel. Gus has a history with them and they were his biggest competition, so he decided to play nice and have a meeting. The whole operation hinged on Jesse being able to cook Walt’s meth recipe. In a great scene, Jesse tells off the arrogant Mexican chemists when they try to insult his abilities. Jesse proves them all wrong when he cooks an almost pure batch of meth. The smiles from Gus and Mike were perfect.

When the scene opens with Gus taking pills, you just had the sense he was up to something. When the bottle of tequila was presented, you knew he had taken an antidote for the poison that will allow him to withstand its effects. We knew the whole time Gus was poisoning the cartel. Even Don Eladio knew it. He didn’t trust Gus for a second, yet he drank it. And so did everyone else. But escape is never easy on Breaking Bad.

Gus is on death’s door. The poison is very strong and is taking him down. As Jesse and Mike were carrying Gus to a car, Mike gets shot. The wound looks pretty bad. I’ve said all season that people will die, be it Mike, Gus, Hank, Skyler or Jesse. The only person I think is safe is Walt. Mike and Gus look like prime candidates after this episode.

On the whole, it seemed like this episode was setting up what’s to come. The only thing that was lacking was some Hank. I have a hunch he’s going to play an instrumental part in the season finale, but his absence was felt. Still though, this is just another episode in a long string that stand out during this season of Breaking Bad.